This was starting to catch the attention of a lot of people on Wall Street. And, in general, there’s been a lot of attention paid to Ethereum’s relative strength — particularly on the way up.

But for the first time in a while, we seem to have a crypto cycle that’s centered on Bitcoin, with the most-likely catalyst being the El Salvador news re-centering people’s attention.

So you can see that since yesterday’s low, we’ve had a huge surge in Bitcoin off the bottom and at the same time the Ethereum/Bitcoin ratio has tumbled. Anyway, it’s something to watch to see if this is the start of a new narrative or a one-day blip. 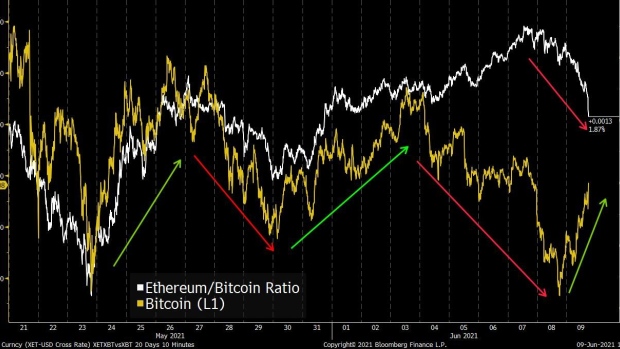 One other interesting development is that Solana, which backs an Ethereum competitor, just had a huge fundraising round, which may be further slowing some of ETH’s momentum.