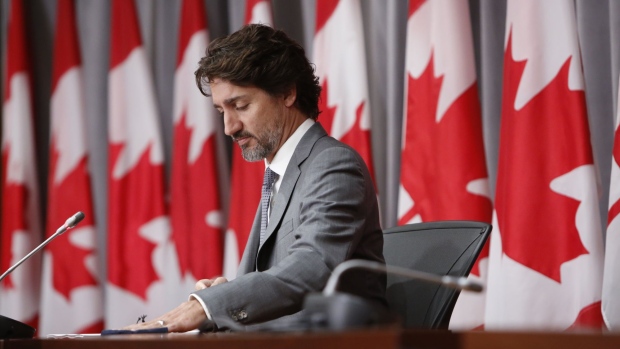 Jean Chretien speaks at a Montreal conference in 2017. , Bloomberg

(Bloomberg) -- The letter circulated by Huawei Technologies Co. was blunt. Canada was becoming dangerously entangled in the diplomatic feud between Washington and Beijing, it said, and there was only one answer: for Justin Trudeau’s government to free the state-championed tech giant’s chief financial officer and let her go back to China.

It sounds like a warning from the Chinese government. In fact, the June 23 letter to the prime minister was signed by a who’s who’s of 19 prominent Canadians -- among them a retired Supreme Court justice, a former attorney-general and several ex-cabinet ministers and ambassadors. Within 24 hours of it making headlines in Canada, Huawei executives were sharing the four-page note with journalists abroad.

The letter was meant to propose an answer to the plight of two Canadian men who’ve been accused by China of espionage and whose grim captivity for more than 18 months has left the nation aghast. Instead, it appears to have hardened Trudeau’s resolve, backed by an electorate that’s no longer in a mood to see the government cut deals with Xi Jinping.

A series of recent polls show public opinion in Canada is shifting against China. Policy is changing, too. Trudeau’s latest approach is a break with his own policies, and those of past governments, that focused on courting stronger trade and commercial ties. Last week, his government became the first to suspend its extradition treaty with Hong Kong in response to China’s new security law.

Trudeau also rejected the idea of a prisoner swap for Meng Wanzhou -- eldest daughter of Huawei’s billionaire founder Ren Zhengfei -- saying an exchange would “demonstrate to China that they can just arrest Canadians and get what they want out of Canada.” Which can’t have been the result the pillars of the Canadian establishment that penned the letter had been expecting.

The 19 signatories said they were writing to Trudeau as Canadians deeply concerned about the survival of Michael Kovrig and Michael Spavor, detained just days after Meng’s arrest in Vancouver on a U.S. extradition request in December 2018.

For 18 months, China denied any link between the Huawei executive’s case and those of the “two Michaels.” But the day after the letter, Beijing made it clear their fates are linked. Zhao Lijian, a spokesman for China’s foreign ministry, told reporters on June 24 that if Canada halted Meng’s extradition process, it “could open up space for resolution to the situation of the two Canadians.”

National security experts suggest Beijing’s response was easily anticipated. “I would be very surprised if the signatories on that letter did not understand that they would be used as a tool of Chinese foreign policy -- they are not the kind of people to walk into this with their eyes closed,” said Stephanie Carvin, a former government intelligence analyst who now teaches international relations at Carleton University in Ottawa.

Canada’s latest national security review warned that the nation has been an “attractive and permissive target” of China’s attempts to covertly advance its interests by using money and so-called “Western enablers.” Unlike its allies Australia, New Zealand and the U.S., which have identified the threat and initiated countermeasures, Canada has largely failed to address the issue, the review said.

In addition to locking up Kovrig and Spavor, China hit back economically after Meng’s arrest, halting billions of dollars in agricultural imports from Canada. Canola farmers in the northern nation are still grappling with the fallout and the lumber industry fears it could be next. This week, Beijing said it could “take further actions” in response to Trudeau’s shift on Hong Kong. It has also warned of consequences if his government bars Huawei from Canada’s fifth-generation wireless networks -- a decision he’s punted amid the detainee standoff.

To be sure, there’s no evidence Huawei or the Chinese government had any hand in the missive to Trudeau. On the contrary, said Allan Rock, a former attorney-general who signed it. “There was absolutely no lobbying effort by Huawei or any other party directed towards me or, to my knowledge, towards any other signatory to the letter,” he said in a written response to questions from Bloomberg.

Rock served as justice minister in the government of Jean Chretien, the most pro-China prime minister Canada has had in the past 25 years. During his time in power from 1993 to 2003, Chretien advocated the notion that by engaging China through trade, the Communist country would eventually liberalize.

The former prime minister has called for Meng’s release as a strategy for freeing Kovrig and Spavor. Chretien even offered to travel to China as a special envoy to negotiate a deal -- an offer promptly touted by Meng’s lawyers in their legal fight. Requests for comment to his office and that of his spokesman weren’t immediately returned.

Chretien’s former chief of staff, Eddie Goldenberg, and his deputy prime minister, John Manley, weren’t signatories to the letter but made earlier public appeals in the Huawei CFO’s case. Goldenberg helps lead the public policy practice at Bennett Jones LLP, a Canadian law firm that’s given advice to the Chinese government in the past. Manley is a director of Vancouver-based Telus Corp., which has lobbied the Trudeau government to be allowed to use Huawei equipment in its networks.

Goldenberg said by phone Friday he doesn’t do any work for China or Huawei. Manley also said he has no commercial relationship with the Shenzhen-based company or the government in Beijing. “I had reacted very quickly in 2018 to the arrest of Meng because I thought it was a mistake and should never have been authorized,” he said by email, adding the “use of Huawei equipment in 5G is unrelated and should be determined according to Canada’s national interests.”

For those who worry about connections between China and former public officials, one source of frustration is gaps in Canada’s lobbying and conflict-of-interest laws. For between one and five years after leaving office, officials face prohibitions on lobbying for or accepting positions with groups they had direct dealings with.

But that leaves a lot of wiggle room. They can’t lobby the Canadian government, but they can lobby a foreign one. After leaving office and complying with the cooling-off period, they are free to represent whatever interests they choose and face no obligation to disclose.

That’s in contrast with Australia, where anyone acting for overseas interests -- including activities such as “communications” and “general political lobbying” -- must disclose their ties in a public registry. That registry was set up after Australia passed anti-foreign interference legislation in 2018 that the government said was needed to curtail Beijing’s meddling.

“We sort of find out, by the by, about very senior Canadians who are on boards of Chinese state-owned enterprises or advising Chinese companies,” said David Mulroney, a former Canadian ambassador to China. “On day 366, you can go and work for anybody and they can benefit from all of the skills and contact information you’ve gathered as a servant of Canada. That’s a problem.”