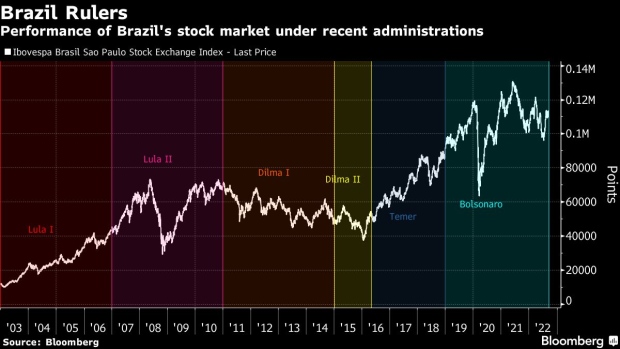 (Bloomberg) -- Brazilian stocks have outperformed global peers this year, and some investors say more gains are likely in store as neither of the two candidates vying for the presidency in the first round of voting Sunday is expected to jeopardize the country’s fiscal accounts in the short term.

But the consensus on the outlook for Latin America’s largest equities market tends to stop there as the two leading candidates -- former President Luiz Inacio Lula da Silva from the Workers’ Party and incumbent President Jair Bolsonaro -- have different views on several issues, ranging from the privatization of state-controlled companies to the focus on a transition to more sustainable energy sources.

While Lula has been more vocal about using state-run companies to help boost the economy, Bolsonaro intends to keep pushing forward with a privatization program he started during his first term and possibly include oil giant Petroleo Brasileiro SA.

Polls published before ballots opened on Sunday mostly gave Lula a lead, with some pollsters signaling he could receive enough votes to support an outright win in the first round. A runoff is slated for Oct. 30 if needed.

Bolsonaro or Lula: Brazilians Decide Who Deserves Another Chance

Brazil’s Ibovespa Index is up 7.9% in dollar terms this year compared with a 25% drop in the US S&P 500 Index. Valuations still look historically attractive, investors said. “Brazil is cheap” said Greg Lesko, a portfolio manager at Deltec Asset Management in New York.

Here’s what to watch for ahead of the vote:

Efforts to shore up Brazil’s low-income housing segment “should continue regardless of political outcomes,” Citigroup Inc. analysts including Andre Mazini wrote in a note earlier this month. That means builders with a focus on low income housing, such as MRV Engenharia e Participacoes SA and Direcional Engenharia SA, could see renewed interest. Another boost to the sector could come from an expected end to Brazil’s tightening cycle. Brazil’s central bank left its benchmark Selic rate unchanged at its September meeting after a 1,175 basis-point jumbo hike.

While Lula has signaled that Petrobras could embark on a fresh cycle of investments in lower-return assets such as refineries, Bolsonaro said in August that his economic team had the green light to propose and plan a potential sale. The government controls Petrobras with a 50% stake in common shares of the $76 billion company.

“I don’t think Petrobras is worth zero under a Lula government, and investors are aware his comeback is unlikely to represent a return for those Dilma years,” said Leonardo Rufino, a portfolio manager at Mantaro Capital in Rio de Janeiro. “But a higher level of political interference is expected.”

Veteran emerging-market investor Mark Mobius said “probably there’ll be a step-up in consumer spending” under Lula. The former President signaled that in addition to maintaining the current social program that pays 600 reais ($111) in cash handouts to low-income Brazilian families he would boost the amount by 150 reais per child under age six. Earlier this month, Bolsonaro too indicated that he intended to increase outlays made through his flagship Auxilio Brasil program by 200 reais to 800 reais a month to those who get a job while receiving the handouts.

Watch out to mall operators such as BR Malls Participacoes SA. Discount retailers and some companies that cater to low-income consumers, including Magazine Luiza SA, MercadoLibre Inc., Lojas Renner SA, could potentially benefit from higher consumer expenditures as a result of the stimulus programs, according to JPMorgan Chase & Co. equity strategist Emy Shayo.

If traders sense a more interventionist macro policy under Lula that raises the pressure on the Brazilian real, they might pile into the world’s second-largest iron-ore producer, Vale SA, and pulp maker Suzano SA, which get a considerable part of their revenue in US dollars.

Lula has signaled the transition to green energy should be a key pillar of his economic program. This might lure some investors who got spooked by Bolsonaro’s fiery rhetoric on topics ranging from the Amazon rain forest to the Covid-19 pandemic. That means companies such as waste management firm Ambipar Participacoes e Empreendimentos SA could perform well, and more broadly, that large-cap stocks might benefit from increased inflows.

“A Lula administration is perceived to be comparatively more committed to an ESG agenda, which could eventually pay foreign policy dividends,” Goldman Sachs Group Inc. economist Alberto Ramos wrote in a note.