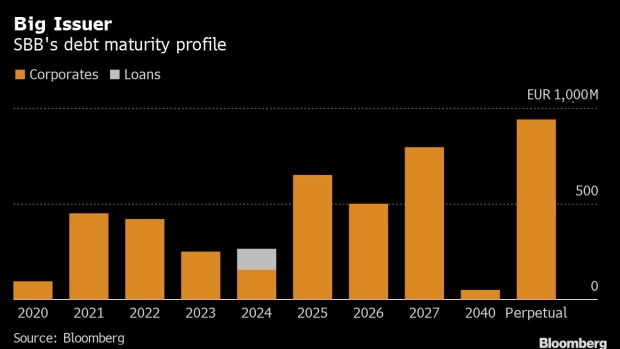 (Bloomberg) -- Bondholders in one of Sweden’s biggest property firms say they fear their investment might soon be labeled junk after learning of a criminal probe with wide-reaching ramifications.

The company in question is Samhallsbyggnadsbolaget i Norden AB, also known as SBB. Its chief executive, Ilija Batljan, was this week detained by police for questioning amid reports of insider trading tied to a recent acquisition. The news sent SBB’s share price and bonds plunging.

The episode has struck a nerve in a market already shaken by panic selling. Back in March, 35 credit funds slammed shut to halt a client exodus as the bond market tanked. Real estate bonds played a big role in the rout, and the financial watchdog has since signaled concern over the sector’s dominance in credit markets, following its conspicuous growth.

Batljan was released by police on Wednesday after answering questions on his adherence to Sweden’s Market Abuse Regulation. The country’s Economic Crime Authority says the investigation is ongoing, and that Batljan remains part of that probe. SBB’s board has said it has full confidence in its CEO, while Batljan himself has denied any wrongdoing.

But bondholders are now worried about what the ongoing case means for their investments.

Fredrik Tauson, a portfolio manager at Nordic Cross Asset Management AB who holds SBB’s hybrid debt, said that to protect its current long-term issuer ratings of BBB-, the company “has to reduce debt by selling assets in a deteriorating and unfavorable market.” The allegations against Batljan “won’t facilitate this process,” he said.

Since news broke of Batljan’s detention, yields on SBB’s most recently issued senior unsecured euro bonds more than tripled to 3.6%. The average yield for BB-rated European junk bonds is 4.5%, as measured by the Bloomberg Barclays Pan-European High Yield Index.

Bloomberg spoke with three other SBB bondholders who voiced similar concerns, while asking not to be identified by name.

Danske Bank analyst Louis Landeman says there was already some concern over SBB’s divestment plan, knowing that it needs to sell assets worth over $1 billion to support its ratings. “If the market abuse allegations prove true, this will add to the already high uncertainty,” he said.

Those divestments are a “key prerequisite for SBB’s current credit ratings,” Landeman said. “The CEO’s investigation ultimately weakens the company’s ability to safeguard its ratings from a downgrade to high-yield.”

SBB currently has almost 4.3 billion euros in debt outstanding and has been a prolific issuer in both euros and Swedish kronor. In the first quarter alone it sold three euro bonds totaling 1.3 billion euros, including a hybrid note and a 20-year private placement.

But a number of SBB’s creditors aren’t allowed to hold junk-grade bonds, and would have to sell their investment if Standard & Poor’s and Fitch lowered their ratings on the company.

“The initial effect might be some forced selling in the senior unsecured bonds from mutual funds with strict investment-grade mandates,” Tauson said.