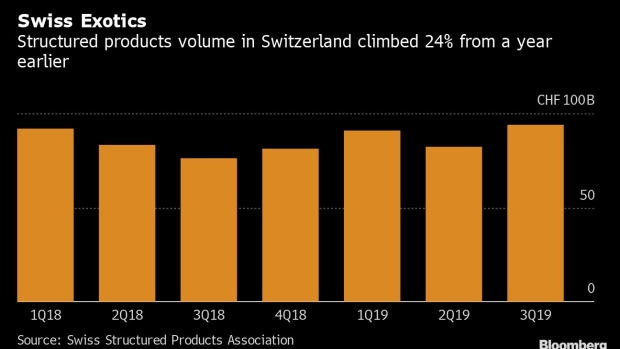 CLEVELAND, OH - JULY 15: A news photographer makes images of nets filled with thousands of red, white and blue balloons before they are lifted into the ceiling of the Quicken Loans Arena July 15, 2016 in Cleveland, Ohio.The Republican National Convention is scheduled to begin on Monday. (Photo by Chip Somodevilla/Getty Images) , Photographer: Chip Somodevilla/Getty Images North America

A Swiss wealth manager is pitching a racy way to bet on stocks ahead of potential market disruptions spurred by the U.S. presidential election.

Julius Baer Group Ltd. is selling as much as $40 million of structured notes tied to large American companies hinging on which party holds the White House next year. Pick the note that corresponds to the winner and profit, at least in theory.

Julius Baer, which oversees 422 billion Swiss francs ($436 billion), is wading into the famously fraught and speculative debate over the partisan drivers of this record stock rally. For many traders, Wall Street’s disastrous calls in the run-up to the 2016 election remain a fresh memory.

Structured products may strike many as an obscure way to play the election cliffhanger but the instruments are big business in Switzerland, where investors in the third quarter bought and sold some 94 billion Swiss francs worth, according to a trade group.

“I am sure that other issuers will shortly come up with some similar thematic baskets for their retail clients,” said Martin Raab, a Zurich-based senior portfolio manager at Asset Security Trust, who buys the products on occasion.

The Julius Baer notes have a term of one year and pay out the performance of the basket at maturity. With entry costs between 1.28% and 1.4%, they’re more expensive than a typical exchange-traded fund, but they can be cheaper and quicker for issuers to put together. Structured products use derivatives to track the performance of an underlying asset.

A spokeswoman for the bank said she couldn’t comment on individual securities.

With 10 months to go until the nation votes, strategists are increasingly focusing on the specific policies of President Donald Trump and the candidates vying to face him. Sectors like health care, financials and tech “would see quite significant changes to their operating environment if a Democratic candidate won,” Jefferies Group LLC strategists recently wrote in a note.

Raab questions Amazon’s inclusion in the Republican-themed basket, pointing out that it recently lost out on a cloud computing contract with the U.S. government. He’s also critical of the idea that a Democrat administration will prove the proximate cause of any fresh outperformance in consumer-linked names like Coca-Cola Co.

Buying packaged securities to bet on political themes doesn’t make the wagers any easier to win. Vontobel Holding AG and Leonteq AG were among firms that sold notes in 2016 that would benefit from a Hillary Clinton or Donald Trump presidential victory. More than 80% of Leonteq’s customers’ dollars wagered on Clinton.

In the U.S., DEMS and GOP were ETFs that purported to align with the policies of the leading political parties, but they shuttered in 2018 after gathering less than $2 million in combined assets.

The Julius Baer securities will be issued on Jan. 29.

To contact the reporter on this story: Yakob Peterseil in London at ypeterseil@bloomberg.net

To contact the editors responsible for this story: Sam Potter at spotter33@bloomberg.net, Sid Verma