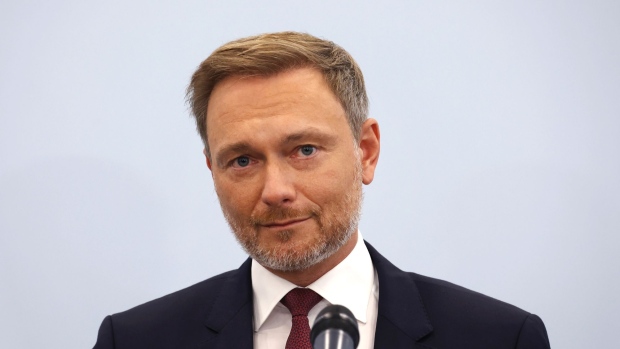 A German national flag flies outside the Bundestag parliament building, also known as the Reichstag, in Berlin, Germany, on Tuesday, Sept. 28, 2021. Olaf Scholz of the Social Democrats defeated Chancellor Angela Merkel’s conservatives in an unprecedentedly tight German election which is still to decide who will lead Europe’s biggest economy. , Bloomberg

(Bloomberg) -- Olaf Scholz secured a ruling alliance and is on track to be sworn in as Angela Merkel’s successor as German chancellor in early December.

His three-way coalition between his labor-friendly Social Democrats, the Greens and the pro-business Free Democrats thrusts untested politicians into decision-making roles.

Read more: Scholz Needed a Crisis for His Plan to Win German Vote

While the final lineup won’t be announced until later, here’s a look at some of the likely key players in Scholz’s cabinet:

Background: The 42-year-old FDP chairman campaigned for reducing burdens on business and eliminating expenditures like subsidies for electric cars. In 2000 — the same year he was elected to state parliament in North Rhine-Westphalia — he co-founded Moomax GmbH, a company that marketed Internet avatars. After securing venture capital funding, it collapsed as the dot-com bubble burst. He now describes it as a learning experience and uses it to promote the idea that Germany needs to encourage people to take risks.

Bottom Line: Holding the key to Germany’s purse strings, Lindner will be a powerful figure, and his vow to defend fiscal prudence could clash with the Greens and the SPD as they push for investment in climate protection and social housing.

Background: The 52-year-old co-leader of the Greens has been instrumental in the party’s rise to the political mainstream. He comes from Germany’s far north between the North and Baltic Seas, where he says “the horizons are wide and the people are grounded.” His political engagement started in 2002, when he pushed for more local bike lanes. He’s written children’s books and novels with a collaborator. He previously served as environment minister for the state of Schleswig-Holstein.

Bottom Line: As a so-called super minister, Habeck stands to become one of the most influential figures in German government. With oversight over key policy areas, he could seek to position himself for a later run for chancellor.

Background: The Greens picked their co-leader as their chancellor candidate, and for a time, it looked like the 40-year-old might have a chance of succeeding Merkel. But her campaign faltered following a series of missteps and an allegation of plagiarism. A former competitive trampolinist, she helped revive the Greens —  sixth in the 2017 election — by appealing to urban voters with a pragmatic approach to fighting climate change. She studied international law at the London School of Economics and political science and public law in Hamburg.

Bottom Line: As Germany’s first female top diplomat, Baerbock is expected to take a more assertive stance on the global stage, push a tougher line on China and Russia and put climate protection at the heart of the country’s foreign policy.

Background: Schmidt, who is likely to take the cabinet-level role as Scholz’s chief of staff, has been the SPD candidate’s right-hand man stretching back two decades when the incoming chancellor was the party’s general secretary under Gerhard Schroeder. Schmidt followed his friend and mentor to Hamburg and returned to Berlin as a deputy finance minister. The 51-year-old has made a statement with his loyalty, backing Scholz when the finance minister came under pressure for the Wirecard AG scandal and a raid at the ministry during the election campaign.

Bottom Line: Schmidt will play a key role in keeping the unprecedented three-way coalition on track and quelling skirmishes in one of the cabinet’s most challenging jobs.