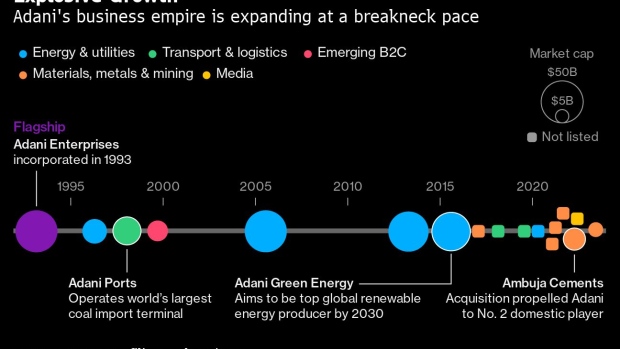 The category of corporate investors have tendered the most at 3.9 million shares while retail investors have offered to sell a little over 706,000 shares to the ports-to-power conglomerate with qualified Institutional buyers making up the rest, according to data available on the National Stock Exchange website. All shares being offered will fetch a fixed price of 294 rupees ($3.6) a piece, that is 27% lower than Monday’s closing price for NDTV.

The exchange disclosure did not name the funds or institutions that have offered to sell their NDTV shares.

The conglomerate, helmed by Asia’s richest person Gautam Adani, is running an open offer until Dec. 5 to buy as much as 16.76 million shares -- or 26% of equity -- from NDTV’s minority investors. The requirement to hold an open offer was triggered after the Adani Group bought an indirect 29.18% stake in August in the media firm. NDTV founders, Prannoy Roy and Radhika Roy, who have said they neither knew about Adani buying in nor consented to it, own about 32% stake in the broadcaster.

The takeover bid has stoked concerns about erosion of press freedom in the world’s largest democracy as NDTV is seen as one of the few local media outlets relatively critical of India’s federal government. Adani told the Financial Times this month that he intends to scale up NDTV to make it an international media group and has asked Roy to remain as chair.

The open offer was approved by India’s capital markets regulator earlier this month. Adani Group is on a breakneck expansion spree as the tycoon diversifies beyond his coal-based businesses into airports, digital centers, cements, green energy and now media.

Shares of NDTV have rallied following Adani’s interest in the company. They have risen almost 250% this year and are on course for best yearly gain since trading debut in 2004.

--With assistance from Devidutta Tripathy and Anirban Nag.