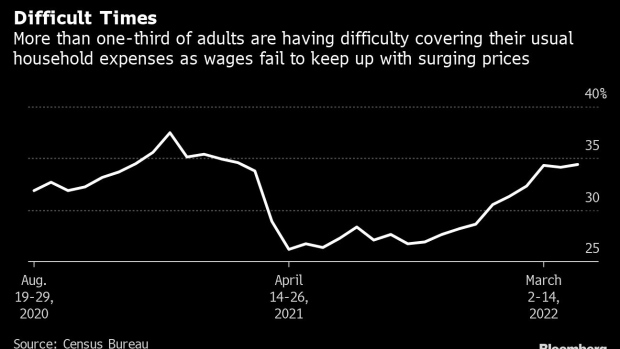 (Bloomberg) -- More than a third of Americans reported difficulties to pay bills in the latest US Census Bureau household survey, showing how much of a toll the surge in consumer prices has taken on budgets.

The share of respondents saying it has been somewhat or very difficult to pay for usual household expenses is now near its 2020 peak, at the worst of the Covid-19 pandemic.

In cities including Los Angeles and Miami, more than 4 in 10 households reported having financial stress, according the household pulse survey for the April 27-May 9 period.

The Census Bureau created the weekly survey at the onset of the pandemic to collect real-time data on how people’s lives have been impacted by Covid.

Like in many other parts of the world, inflation has surged to decades highs in recent months, making everything more expensive -- from gasoline to chicken, eggs, milk and lodging. Wages haven’t kept up.

The survey shows a sharp increase in financial stress in many of the country’s largest metropolitan areas. In Dallas, for example, the share of respondents having difficulty paying bills jumped to about to 37% from 23% last August.

Household hardship will probably worsen in the next weeks as food prices continue to soar, interest rates increase and the economy is bound to slow.

Higher energy bills are also weighing heavily on many families and likely to get worse in the summer, when large swaths of the country need air conditioning to cope with high temperatures.

In the latest survey, more than a quarter of households in Los Angeles said they were unable to pay an energy bill in full over the past year. In Miami, that share was over 20%.