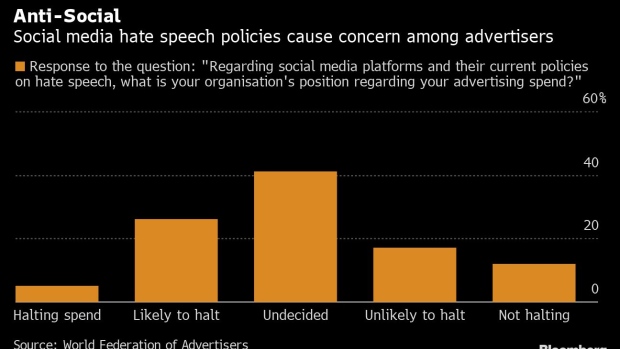 (Bloomberg) -- Almost one in three top brands are set to stop spending on advertising with social media platforms like Facebook Inc., Twitter Inc. and Alphabet Inc.’s YouTube due to hate speech policies, according to a new survey.

Among major brands, 5% said they have already withheld money from such platforms, and a further 26% said they are likely to do so, according to a poll from the World Federation of Advertisers. The industry lobby group says it represents 90% of global marketing spending, or about $900 billion a year. About 40% of companies are undecided.

Facebook has come under particular fire from organizations like the Anti-Defamation League, who say it isn’t doing enough to curb hate speech. A growing list of top tier brands, from Starbucks Corp. to PepsiCo Inc. said they will stop spending on the platform, which sent Facebook’s shares down 8% on Friday. Still, Facebook is well-insulated from a blue-chip revolt because most of its ad sales come from small- and-medium sized businesses.