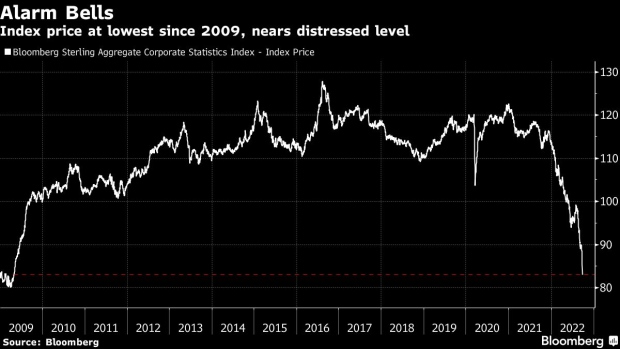 (Bloomberg) -- It’s a sign of just how troubled a market is when the price of roughly a third of the safest sterling corporate bonds drops into distressed territory, compared to just one at the end of last year.

Bloomberg’s index of investment-grade sterling company bonds has 340 securities quoted at below 80 pence on the pound, the threshold generally used to indicate distressed territory. Over half the index consists of UK companies, including those of pharmaceutical firm GlaxoSmithKline, British Land Company PLC and British American Tobacco, some of which are quoted below the threshold.

Most of the jump in the number of distressed bonds happened in the two days through Monday, triggered by the government’s plan to fund the nation’s biggest tax cuts in 50 years through more borrowing. While the UK credit market was already having a difficult year, the selloff recently, particularly in the pound and government debt, put sterling notes at the center of the world’s worst bond selloff in decades. The moves this past week have dragged the overall index price to within a few pence of distress, but it’s worth noting that not a single bond’s spread is above 1,000 basis points, another measure of distressed debt.

“The rout in gilt yields has filtered into credit spreads too and that combination has pushed many sterling high grade bonds into distressed pricing despite the credits themselves not being distressed and rated investment grade,” said Mahesh Bhimalingam, chief European credit strategist at Bloomberg Intelligence. “The longer duration of sterling credit vs. euro credit really doesn’t help in this environment.”

Year-to-date returns on the index are down almost 25%, more than three-times the drop in 2008, the index’s annual record. The drop is almost double that of Bloomberg’s gauge of sterling-denominated junk bonds, which also saw an increase in notes quoted below 80 pence. A third of the 74-member index fell into that category, up from just two at the end of last year.

“We’re shifting from a near term recession scenario to potentially a more sustained stagflationary backdrop and a more aggressive central bank, neither of which is likely to provide much comfort or confidence to investors,” wrote JPMorgan Chase & Co. strategists including Matthew Bailey in a note advising investors to steer clear of sterling credit. “We’ve been looking for sterling to underperform euros over the second half of the year since our mid-year outlook, and this continues to be our view.”