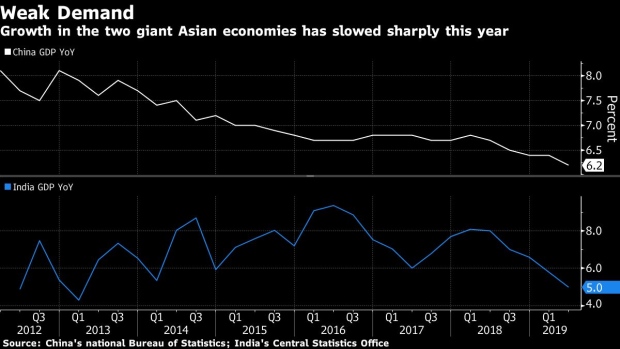 (Bloomberg) -- Down the street from Mumbai’s grand colonial-era Royal Opera House, Deepak Gurnaney sits in his small electronics shop in front of rows of flat screen TVs flashing Hindi-soap operas, while his four staff play with their phones. There are no customers.

The 68-year-old used to need a machine to count the cash brought in by the business his father founded, and a warehouse nearby to keep enough stock. With business down 25% the past two years, he’s got rid of both.

Nearly 3,000 miles away, in the fluorescent lighted sprawl of Beijing’s Zhongguancun Kemao electronics mall, He Hongyuan is singing a similar tune.

“These days consumers tend to be more careful with their spending,” He says from behind the counter of his glass booth, one of hundreds in the mall selling phones, laptops and other gadgets. “In the past, people changed phones as soon as the new model came out. Now they change their phones according to their need.” He said profits have fallen by half in the past two months.

Gurnaney and He are emblematic of the deepening retail gloom in India and China, home to 2.8 billion people, or more than a third of the world’s consumers. Makers of everything from cars to shampoo had pinned their hopes for growth on one or both of these Asian giants, and the effects of the double slowdown are rippling out across the world.

“They’ll probably remain the largest and most promising consumer markets out there, but this slowdown is still a headwind for a global economy that is already struggling,” said Frederic Neumann, co-head of Asian economics research at HSBC Holdings Plc in Hong Kong.

China indicated growth this year could be as low as 6%, the slowest on record, while India’s expansion was the weakest in six years in the June quarter. The two nations’ auto sales tell the story. China’s sales of sedans, sport utility vehicles, minivans and multipurpose vehicles fell for the 14th time in 15 months in August, the same month that India’s car sales had their biggest annual decline on record.

Even though their growth rates are still higher than most other countries, the slowdown is critical for the two developing nations. China needs to keep up the pace of expansion to deal with a pile of debt amassed during its boom years. And youthful India is relying on a robust economy to absorb millions of new job seekers each month.

“The old drivers of growth are really running out of steam,” said Julian Evans-Pritchard, Singapore-based economist for Capital Economics. He said younger consumers in China are more wary of spending on luxury goods and cars than their parents. “I think they’re going to have to get used to incomes growing at a much slower pace.”

In India, the government announced corporate tax cuts worth $20 billion last month to cushion the slowdown. But with a financial system choked by soured loans and unemployment at a 45-year high, the mood of pessimism is still hurting sales of companies from jeweler Titan Co. Ltd to deodorant and ice cream maker Hindustan Unilever Ltd.

Few places in India have been harder hit than the southern city of Chennai, center of the nation’s auto industry. Some 580,000 automotive jobs have been lost the past 18 months.

For Vijay Chacko, who runs a public relations firm in the city, the steady drumbeat of bad headlines has put an end to what he calls his only vice: upgrading his phone every three months to the latest model.

“I’ll be three models behind shortly,” the 52-year-old said by phone from Chennai. “When the situation gets tough, everyone starts tightening their belts.”

India is already the second-biggest market after the U.S. for consumer goods giant Unilever NV. China is the biggest market outside of the U.S. for Starbucks Corp. and Apple Inc, while Hotel chain Marriott International Inc. has 300 new hotels planned for the country. Nike Inc. has posted 20 straight quarters of double-digit sales growth in China.

But in the consumer arena, bad news begets bad news. The U.S.-China trade war, clampdowns on corruption in India and China, and factory closures are making people more worried about the future.

“I know that the economy is slowing down and that in future my income could be lower,” said Chater Zhang, an investment trust manager in the Southeastern Chinese city of Nanchang. “It has already declined significantly.”

China’s second-quarter growth was the weakest since data was first released in 1992. China’s Communist Party had been counting on domestic consumers to take up the slack and reduce the nation’s dependence on exports.

Instead, sales of big ticket items such as autos and home appliances have slowed, and companies including Haier Electronics Group Ltd. and Henkel AG, which makes cosmetics and adhesives, have noted weaker demand in smaller purchases.

Overall sales at the country’s top 100 retailers, including e-commerce giants such as Alibaba, have been shrinking, according to data from Capital Economics. And even during China’s Golden Week holiday last week the annual bump in domestic tourism was smaller than a year earlier.

“While the economy continues to grow at a relatively strong pace, it is less strong than it was two and three years ago,” Pat Grismer, chief financial officer of Starbucks, said about China at a conference last month. “We’re seeing that show up in retail footfall.”

Back at the electronics shop in Mumbai, Gurnaney has managed to sell a microwave oven to a caterer who paid cash. It hasn’t improved his mood. With the Hindu festival of Diwali approaching -- traditionally a gift-buying bonanza for retailers -- he’s reducing inventory rather than adding to it.

Even if the economy does pick up, changes in the way consumers buy goods, such as ordering online, could mean many shops like his will never recover.

“I just come here to pass the time,” he says, reaching for his kettle to make a cup of tea. “We’ve been in this line for the past 50 years. We can see the writing on the wall.”

--With assistance from Ganesh Nagarajan.

To contact the editors responsible for this story: Rachel Chang at wchang98@bloomberg.net, Adam Majendie