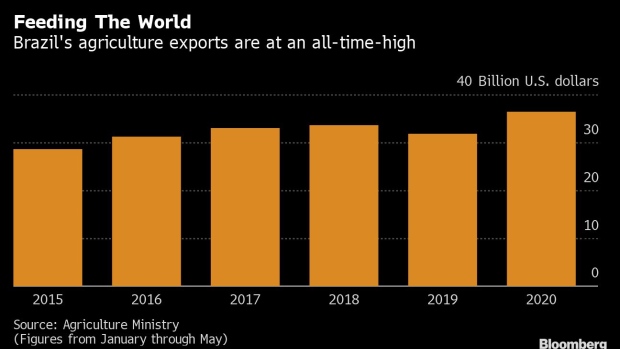 SAO PAULO, BRAZIL - MARCH 20: Butchers work at the popular Lapa Market March 20, 2017 in Sao Paulo, Brazil. Brazilian Federal Police launched a major operation in several Brazilian states with search and arrest warrants for directors of the country's main meat-producing companies, such as JBS and BRF. Thirty-three employees of the Ministry of Agriculture were removed from office for alleged involvement in a corruption scheme and receiving a bribe for allowing spoiled meat to circulate in Brazilian supermarkets. (Photo by Victor Moriyama/Getty Images) , Photographer: Victor Moriyama/Getty Images South America

(Bloomberg) -- More than 1,000 workers at a JBS SA pork plant in Brazil, or a quarter of those tested, were infected with Covid-19, according to figures from the Labor Prosecutor’s Office.

While almost all have recovered, the high rate of infection reveals the challenges Brazilian meat companies face to keep plants running as the virus spreads in the nation.

Mass testing at JBS’s Dourados plant in Mato Grosso do Sul state started on May 25, according to documents shared by prosecutors. Of 4,134 employees tested, 1,075 were positive through July 1.

JBS says 20 people, out of the plant’s 4,300-strong workforce, are currently off work due to Covid-19. The company said in a statement it implemented its contingency plan just after getting the first case confirmed at the plant, helping to avoid further contamination among workers.

In the same municipality, a poultry plant owned by BRF SA also reported a coronavirus outbreak. The unit had 85 confirmed Covid-19 cases, of which 72 are recovered and back at work, according to figures from July 3 shared by the Prosecutors Office. The plant employs 1,500 workers.

BRF said it voluntarily adopts a protocol for Covid-19 testing in all its units, including in Dourados, that aims to safeguard workers and operations. The company said it only releases the number of positive cases to competent authorities to respect employees’ privacy.

Both companies had said they are hiring to replace workers removed due to Covid-19 infections.

Brazil has become a new coronavirus epicenter with the number of infections only trailing the U.S. After first reaching the largest cities, the virus is now spreading through the countryside. Mato Grosso do Sul is in Brazil’s agriculture heartland.

Since last week, China suspended meat imports from more than 20 plants in different countries that had reported Covid-19 outbreaks, including four Brazilian facilities, one owned by JBS. The move raises concerns about more suspensions and is expected to slow the growth of meat imports by the Asian giant, according to Rabobank.