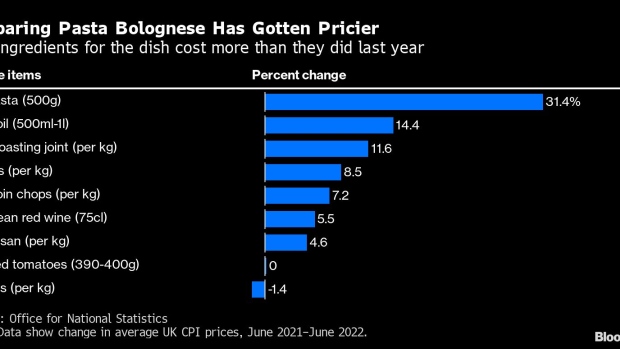 (Bloomberg) -- Angela Hartnett doesn’t like to raise menu prices at her restaurants. In 2013, the pasta Bolognese on the menu at one of her spots, Café Murano, cost £10 ($12) as a first course and £14 as a main, and stayed pretty much the same for seven years.

Then came the pandemic, shutdowns, reopenings and the recent, well-publicized surge in food-and-drink prices, which have affected everything from the cost of an  English breakfast to a pint of beer. Inflation in the UK just hit double digits for the first time in 40 years.

“I’ve never seen things as expensive,” says the renowned chef, 53, whose 30-plus years as a professional cook includes nearly two decades working with Gordon Ramsey at London’s Aubergine. Her four London restaurants include the Michelin-starred modern Italian restaurant Murano, as well as three more-casual Café Muranos. As Hartnett prepared for pasta Bolognese to return to the seasonal menu this fall, she and Chris Yates, managing director of Angela Hartnett Ltd., realized that she’d need to charge about £16 for it as a starter and £24 as a main course.

Besides the increase in ingredient prices, Hartnett and Yates are watching the cost of the electricity and gas rise precipitously. She sources about 90% of her products from Britain, and those might get more expensive because of the summer’s drought.

Salary increases have also affected the bottom line for Hartnett and other chefs. Hospitality industry wages were up 7.7% when measured in March compared with a year earlier.  Likewise, says Hartnett, “landlords have not come back after Covid and say, ‘Here, have a rent reduction.’” That’s all led to a measurable rise the cost of eating out: In June, UK restaurant prices were up 8.6% since the start of the year, according to the Office for National Statistics, though the amount can vary widely across establishments. Hospitality businesses expect to raise prices another 6% this year, according to a survey released Wednesday.

On her menus, Hartnett estimates that she’s raised prices 20%. An average pasta starter at Café Murano that was £11.50 pre-lockdown is now around £15. “You never want to put it on the customer,” she says. But at this point, price increases have become too high for restaurant operators to absorb. “Your bottom line, which is only ‘this’ anyway,  is getting smaller and smaller,” she says, pinching her fingers together.

“You’ve got olive oil going up by 20%, you've got meat going up by 15%,” says Hartnett, about the increases she’s seen in key ingredients for her beefy ragu. (While most Bolognese sauces are made with ground meat, Hartnett chops up pieces of beef and veal or pork for a sauce with more pronounced flavor.) The biggest price jump was for dry pasta: It increased more than 31% in June compared with the previous year, according to ONS data.

Why is pasta becoming so much more expensive? Just think about what it’s made from: wheat. “The war in Ukraine is putting further pressure on global supply, particularly for wheat, leading to higher prices for many staples,” says Andrew Opie, director of food and sustainability at the British Retail Consortium.

In what might amount to good news for some cooks, the cost of one Bolognese ingredient is down. Carrots are 1.4% cheaper than they were last year, according to ONS figures. And at least the price of canned tomatoes barely changed.

Despite the price, the beloved dish has only gotten more popular in the UK. At upscale grocery chain Waitrose, Bolognese sauce sales this summer are 26% higher than they were in 2019, according to the company.

Hartnett says that customers have yet to complain. “They know we're not doing out of greed or is to pay for a new holiday,” she says. “It’s to keep the business afloat.”