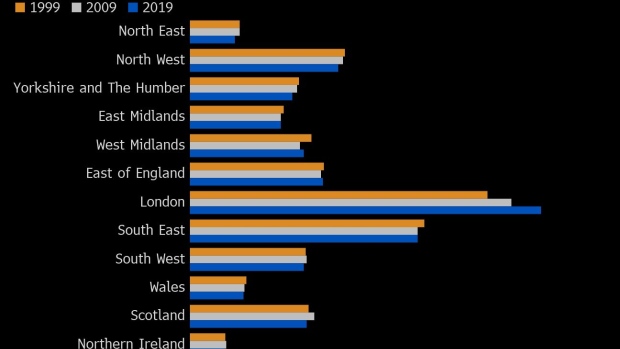 (Bloomberg) -- At London’s Globe Theatre, past is surely prologue.

The famous stage along the Thames, the third iteration of the thatched-roof arena since 1599, has endured the Plague, the great fire and the violent objections of the Puritans. Such perseverance wasn’t lost on Sadiq Khan, who launched his second term as London mayor there in May, along with a campaign to promote the arts, a pivotal cog in restarting the U.K. capital -- the nation’s undisputed economic engine.

London accounted for almost 40% of the U.K.’s annual growth pre-pandemic, contributing twice the output of Scotland and Wales combined, so failure there portends a grim fate for the whole nation.

Without a thriving London, the overall economy could begin to resemble something like Italy, another faded imperial power struggling with debts that are too big, economic growth that’s too anemic and a vicious cycle that has it falling further behind its main competitors, according to the independent Resolution Foundation.

“Squandering the U.K.’s economic advantages, while failing to address its weaknesses -- such as low productivity and high inequality -- could see the U.K. end the 2020s with an economy looking more like Italy than Germany,” said Torsten Bell, the think tank’s chief executive officer.

It’s more than an economic challenge for Prime Minister Boris Johnson, who owes his 2019 landslide victory to the promise to “level up” the hinterlands to narrow the gap with London in the wake of Brexit. But overlooking the capital now would be like attempting to reboot the U.S. without New York and California.

“There can be no national recovery without a London recovery,” says Andrew Carter, CEO of the non-partisan research group the Centre for Cities.

There are few signs of one.

Of the nine English regions, London had the lowest growth in the third quarter of 2020, according to the Office for National Statistics. The Centre for Cities has found that that while small and medium-sized cities are approaching a full recovery, larger ones are lagging.

London has suffered the biggest drop in salaried employees of all U.K. regions during the Covid slump, according to ONS data. When the government program that has subsidized jobs through the crisis ends in September, “there’s a lot of jobs that aren’t going to come back in London,” said Adrian Pabst, deputy director of the National Institute for Economic and Social Research. It expects unemployment in the capital to soar in 2022-23 to 7.9% from 4.5% before the pandemic.

There’s little cause for optimism in the crown jewel of the British economy. London’s financial services industry, all but left out of the Brexit trade deal, has seen hundreds of billions of dollars in assets and thousands of jobs shift to European hubs.

None of this is good news for the Globe, which lost 95% of its income during the pandemic, furloughed 250 staff at one point and made 20 more redundant.

Globe CEO Neil Constable expects the arts industry to be “first in and last out” of the recession, Britain’s worst in 300 years.

The Globe’s tale of woe is common across London’s creative industries, a magnet for the talented and ambitious from around the world who make the city a global destination. But the arts are about much more than setting the next trend.

They contribute 58.4 billion pounds ($82 billion) a year, almost as much as financial services, and buttress the rest of the economy. “If you go out to see a play you’re going to go out for supper as well,” said Claire Harding, research director at the Centre for London. For every pound paid in wages by the arts and culture sector, another two are generated in the wider economy, according to the Arts Council of England.

After a 429-day hiatus, the Globe has reopened for showings of “A Midsummer Night’s Dream” -- albeit at quarter-capacity due to social-distancing restrictions -- but finds itself in a fundamentally different economy.

Constable, already worried about another winter lockdown, doesn’t expect revenue to recover until at least 2024, with international tourists only trickling back.

That shows how Brexit has altered the landscape for an economy that thrives on foreign trade and workers.

The European students who accounted for 38% of the theater’s workshops pre-pandemic now need passports -- not just identity cards -- to visit. “The cost and hassle of obtaining a visa is now a serious competitive disadvantage,” said Josie Dent, managing economist at the Centre for Economics and Business Research.

For domestic audiences, Harding proposes cultural vouchers, akin to the government’s Eat Out to Help Out program last summer, which lured diners to restaurants with half-price meals. “It’s about what can we do to draw people into our wonderful city center rather than force them to go there,” she says.

Likewise, serial hospitality entrepreneur Luke Johnson is calling for a government campaign urging people to “go to the theater, travel on the Tube, work in the office, spend money in the West End, go out to eat, do business in London and attract people.” Yet he’s convinced the young will return because starting their careers, socializing and having fun is “the essence of cities.”

Ultimately, returning to the status quo isn’t an option. Even if London bounces back as restrictions ease, the high cost of living, investment-hungry public transport system and problematic visa system will at some point hold it back, according to Carter. “We need to go beyond where we were,” he said.

That means addressing the property market. Neighborhoods must diversify, says Yolande Barnes, chair of the Bartlett Real Estate Institute at University College London. “Some areas of central London are just too work-orientated or even too tourist-orientated, and too dependent on that influx of people that you might not be able to take for granted any more,” she said.

Bank of England Deputy Governor Jon Cunliffe highlighted in a speech in May that in London, first-time buyers’ deposits are typically 121% of their incomes, compared to an average 48% in the North.

Targeting support regionally is politically tricky, though. City Hall may have been a stepping stone for Johnson to get to Downing Street, but he’s done little to advance recommendations by the London Finance Commission in 2013 and 2017 for more fiscal devolution to the capital and the regions. Gerard Lyons, economic adviser to then-Mayor Johnson, accused ministers in a paper for the Policy Exchange think tank of a “policy of benign neglect” toward London.

Khan wants the central government to allow Transport for London to diversify its income -- by granting control over more tax revenue -- to reduce its reliance on fares, which cratered as erstwhile commuters have taken to working from home. He argues that for every pound invested into the London Underground, more than half that is paid to workforces outside the capital.

With government help unlikely, there’s even less hope for a hand from the BOE, Carter says. “If the economy’s already hot in London and the Southeast, particularly through property bubbles, that creates a problem for national policy makers.”

BOE Chief Economist Andy Haldane is, nonetheless, “fantastically optimistic” about the capital’s future. “I’ve read the history books and they tell me that London always finds a way to bounce back,” he said in an interview with the Centre for the Study of Financial Innovation. “Whatever the adversity, it’s ultimately a very malleable, flexible, dynamic place -- always has been, always will be.”

Like London, the Globe has used the pandemic’s reprieve for self-reflection, pivoting to digital offerings, which Constable says have given creative professionals “greater opportunities to get work out there in a way that might not have happened before.” For now, at least, it isn’t curtains for the Globe -- or the city.