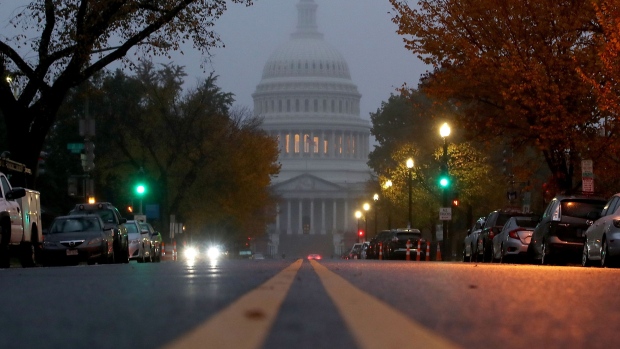 WASHINGTON, DC - NOVEMBER 06: Fog surrounds the U.S. Capitol building on November 6, 2018 in Washington, DC. Today millions of Americans will head to the polls and vote in the midterm elections that will decide what party will control the House of Representatives and the U.S. Senate. (Photo by Mark Wilson/Getty Images) , Photographer: Mark Wilson/Getty Images North America

The Federal Reserve is keeping a close eye on economic data as it “assesses the appropriate path” for monetary policy, but the central bank and traders in financial markets may find their vision blurred if Washington gridlock spurs yet another government shutdown later this month.

Previous closure episodes -- most recently the one that ended in late January -- have caused disruptions to the release of major economic indicators such as the gross domestic product report and trade figures. With temporary funding measures due to expire Nov. 21, there’s a risk that could happen again if lawmakers and the administration don’t reach an agreement.

With global fights over trade adding to uncertainty and the Fed at a potential inflection point for policy, any postponement of data could hamper both traders and officials in their attempts to understand if there has been any material change to the outlook. Among the figures that Fed Chairman Jerome Powell and other officials will be looking at will be the all-important monthly jobs report, inflation indicators and readings on GDP.

“Timely data is more important because Powell has convinced everyone there’s a fairly long lag surrounding the effects of trade issues,” FTN Capital strategist Jim Vogel said in a phone interview. He pointed in particular to the importance of data on the first quarter of 2020, which may reveal the potential cost of the trade uncertainty.

U.S. President Donald Trump, who is currently subject to an impeachment inquiry in Congress, said on Sunday when asked about a potential government shutdown that he “wouldn’t commit to anything” and “it depends on what the negotiation is.” House Speaker Nancy Pelosi on Friday said she doubted Trump would respond to the Democrats’ impeachment inquiry by forcing a confrontation over funding that might trigger a government shutdown.

Parts of the government were closed from Dec. 22 through Jan. 25, the longest shutdown in modern U.S. history, as Democrats and Trump argued over the president’s demand for border-wall spending. During that time, myriad economic data releases, including figures on new home sales, durable goods orders and GDP figures, were all delayed due to the partial five-week shutdown.

The issue of the U.S. government debt ceiling, which has on occasion become entwined with debates over government closures, is not an issue this time around, with Congress in August voting to suspend the borrowing limit for two years. That means that even in a shutdown, the government will continue to be able to issue debt.