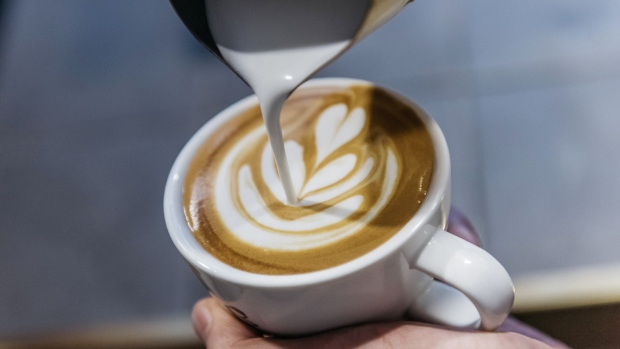 The world is flooded with coffee, but it’s mostly boring beans. For the hand-crafted, artisanal specialty brews, you have to pay up.

Cheap coffee has forced some growers to exit the business, while others are selling their product at a loss, leaving less money to invest in rarer, more-expensive beans. That means varieties favoured by some high-end suppliers like Stumptown Coffee Roaster or Nestle SA’s Blue Bottle are surging in price — and that’s reaching consumers.

Scott Beard, a West Virginia-based music teacher and baritone, recently got sticker shock when a cafe latte he bought while travelling in Paris cost him US$15.80 at a high-end hotel. He might have gotten a bargain. A bag of Elida Estate Panama Geisha roasted by Dragonfly Coffee Roasters recently set an auction record at US$1,029 a pound.

“There’s a lot of coffee in the world, but not the good stuff,” said Peter Roberts, a professor at Emory University’s Goizueta Business School.

U.S. retail prices for high-end coffee surged 24 per cent while their lower-end cousins rose seven per cent in the four years ended in mid-June 2018, according to data tracked by Roberts. Over the same time, the benchmark contract on ICE Futures U.S. in New York plunged 33 per cent. The drop for futures means most farmers are getting paid about US$1 a pound, or less, for regular beans.

Low prices means production is falling in areas that specialize in premium beans such as Costa Rica, El Salvador and Guatemala.

“The demand for that coffee isn’t just coming from North America and Europe,” he said. “Buyers in East Asia have kind of come out of left field, and said ‘Hey, we’re willing to pay top dollar.’”

Despite the depressed commodity cost, Colectivo is paying farmers similar prices to what beans fetched in previous years in a bid to encourage production. “You might be able to save quite a bit of money when the market is down, but that may not endear you to suppliers — this is a two-way street,” Liu said.

Only about 15 per cent of the world’s coffee falls into the specialty category, said Ric Rhinehart, executive director emeritus at the Specialty Coffee Association. Given that producers tend to plant both ordinary and gourmet beans, low benchmark prices mean they can’t afford investments in specialty trees, machinery or fertilizers.

Take the case of Carlos Batres, a fifth-generation coffee grower in El Salvador. He was the first producer in the world to produce the specialty pacamara variety in the 1980s. His beans can fetch a premium of as much as 300 per cent over benchmark prices.

Producing the variety requires meticulous care and labor. Batres is lucky to have started his specialty business more than three decades ago. It’s unfathomable to think he’d be able to make the switch at current prices.

“We do everything we can: cut only the ripe cherries, make sure they are shade grown, place windbreakers so the plant isn’t hurt. Everything is done by hand,” said the 66-year-old farmer. He estimates El Salvador is now producing about 10 per cent of what it did at its peak in 1979.

“We would not be able to survive if we were paid the exchange prices,” he said.

Meanwhile, demand has never been stronger. The New York-based National Coffee Association estimates the share of gourmet coffee consumed by Americans reached a new high at 61 per cent.

It’s easy to see why consumption is growing — by some measures, coffee has never tasted better. The Elida Estate Panama Geisha variety from Dragonfly Coffee Roasters, the java that set an auction record, also got the highest ever tasting score from Coffee Review, an industry benchmark.

“Production will start to fall off if coffee farmers aren’t able to make a sustainable living,” said Tamas Christman, the founder and chief executive officer of Boulder, Colorado-based Dragonfly. The specialty varieties can help in “getting people to understand it’s worth more than what the commodity market is giving it,” he said.

Part of the problem is that many suppliers and buyers are basing their prices off of the New York futures market, which Roberts of Emory University call the “elephant” in the room.

Some growers in Mexico and Central America are switching to food crops like corn because of the sustained price slump, said Michael Sheridan, the director of sourcing and shared value at Chicago-based Intelligentsia Coffee, a chain of boutique coffee shops.

“Most of the risk goes to the people who can least afford to bear it, who are the growers,” Sheridan said. “Growers are not just facing a price risk, they’re facing an acute threat from climate change. The odds are more stacked against growers today than they were during that last price crisis.”

--With assistance from Millie Munshi.