As economic growth and inflation forecasts climb, exchange-traded funds tracking loans have emerged as a haven of sorts as they’re poised to benefit from higher interest rates.

Those ETFs have lured more than US$3 billion so far in 2021 and are on track for their biggest first-half haul since 2013, according to Bloomberg Intelligence data. The US$3.8 billion SPDR Blackstone Senior Loan ETF (ticker SRLN) has seen 24 consecutive weekly inflows -- attracting US$1.5 billion so far this year -- and is followed by the US$5.9 billion Invesco Senior Loan ETF (ticker BKLN), which has taken in roughly US$1.1 billion. 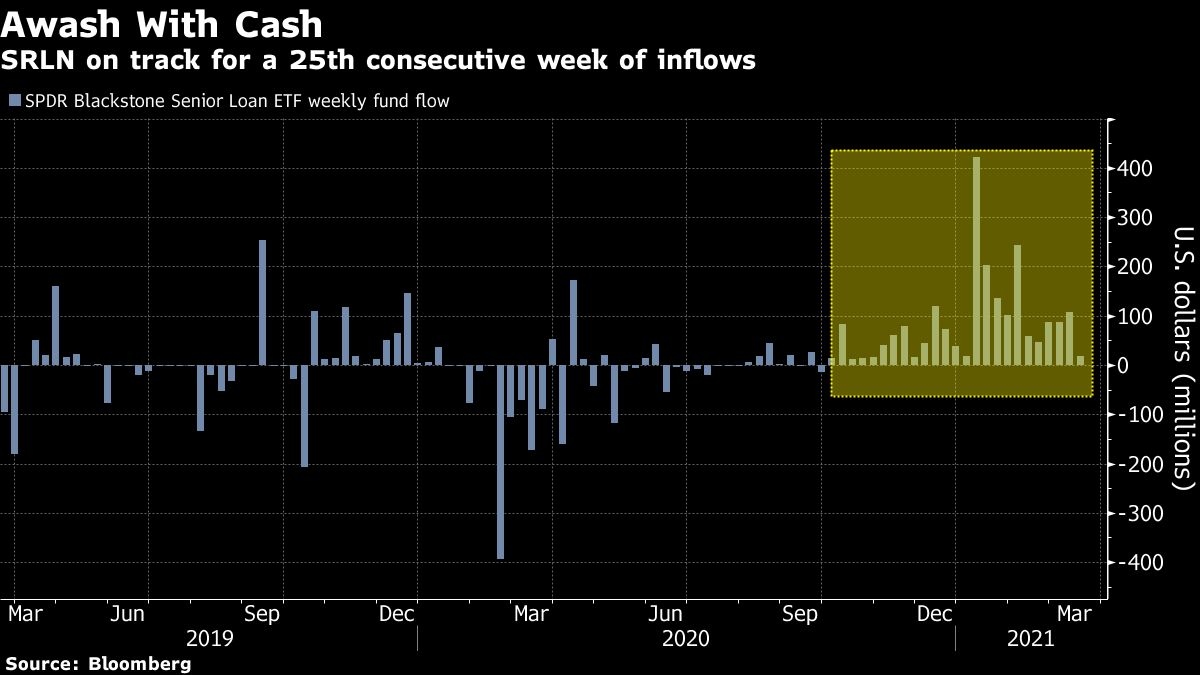 Growing concern over a pickup in inflation amid an economic revival has rippled across asset classes, whiplashing technology stocks and dragging down high-grade bonds. It’s also shone a spotlight on high-yield debt as well as loans and notes that offer floating interest rates. Unlike the fixed payments on most conventional bonds, those on floating rates go up as benchmark rates do -- helping preserve their value.

“Rising rate expectations, what’s happening in Treasuries, breakevens -- that’s all favorable news for loans because duration doesn’t hurt them,” said Dan McMullen, senior portfolio manager at Blackstone Credit’s Liquid Credit Strategies unit. “Especially in an environment where you have improving fundamentals, credits are getting better, we expect to see increased credit upgrades, and we have this reflation trade.” 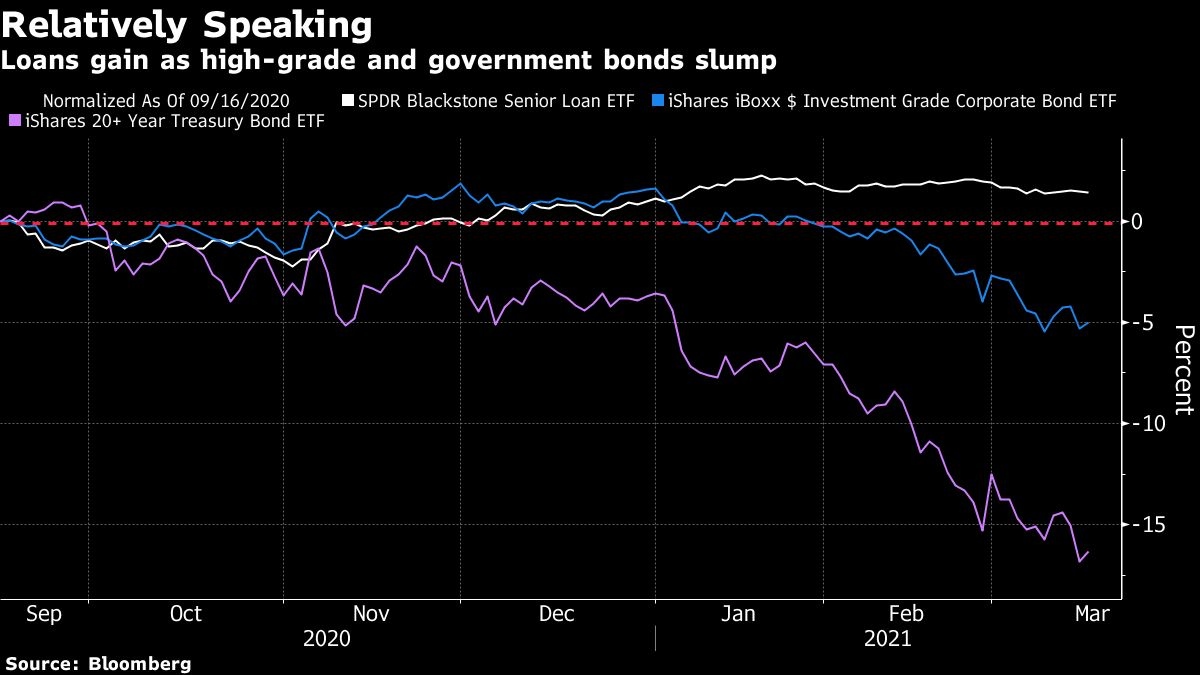 The comparatively low exposure to rate risk has helped buffer loan ETFs from a months-long selloff in U.S. government debt. SRLN and BKLN have climbed 1.6 per cent and 0.7 per cent over the past six months, compared to a nearly 17 per cent slump in the US$15 billion iShares 20+ Year Treasury Bond ETF (ticker TLT) over that period. Meanwhile, the US$44 billion iShares iBoxx $ Investment Grade Corporate Bond ETF (ticker LQD) has fallen almost 5 per cent in that span.

Floating-rate debt -- such as loans -- is particularly sensitive to the path of monetary policy and tends to fare better when interest rates are on the rise. While policy makers led by Federal Reserve Chairman Jerome Powell have reiterated that they don’t plan to boost rates in the foreseeable future, that hasn’t deterred bond traders. As of Monday, eurodollar contracts reflected a full quarter-point increase around March 2023.

That conviction can also be seen in five-year breakeven rates, which are currently trading near their highest since 2008. To hedge against price pressures, investors should look to high-yield and loan ETFs as an alternative to inflation-linked securities, according to Citigroup Inc. While the US$26 billion iShares TIPS ETF (ticker TIP) rose a record 9.5 per cent last year, the fund and other TIPS-tracking counterparts have stumbled in 2021 as real yields -- which strip out the effects of inflation -- began to rise, the analysts wrote.

“Our view is that investors will have to move beyond typical inflation hedges, like TIPS ETFs,” wrote Citigroup analysts Drew Pettit and Scott Chronert. “At times, they can disappoint as an outright inflation hedge.”