Global investors are starting to fall out of love with Narendra Modi.

After pouring US$45 billion into India’s stock market over the past six years on hopes that Modi would unleash the country’s economic potential, international money managers are now unwinding those wagers at the fastest pace on record. They’ve sold $4.5 billion of Indian shares since June, on course for the biggest quarterly exodus since at least 1999. 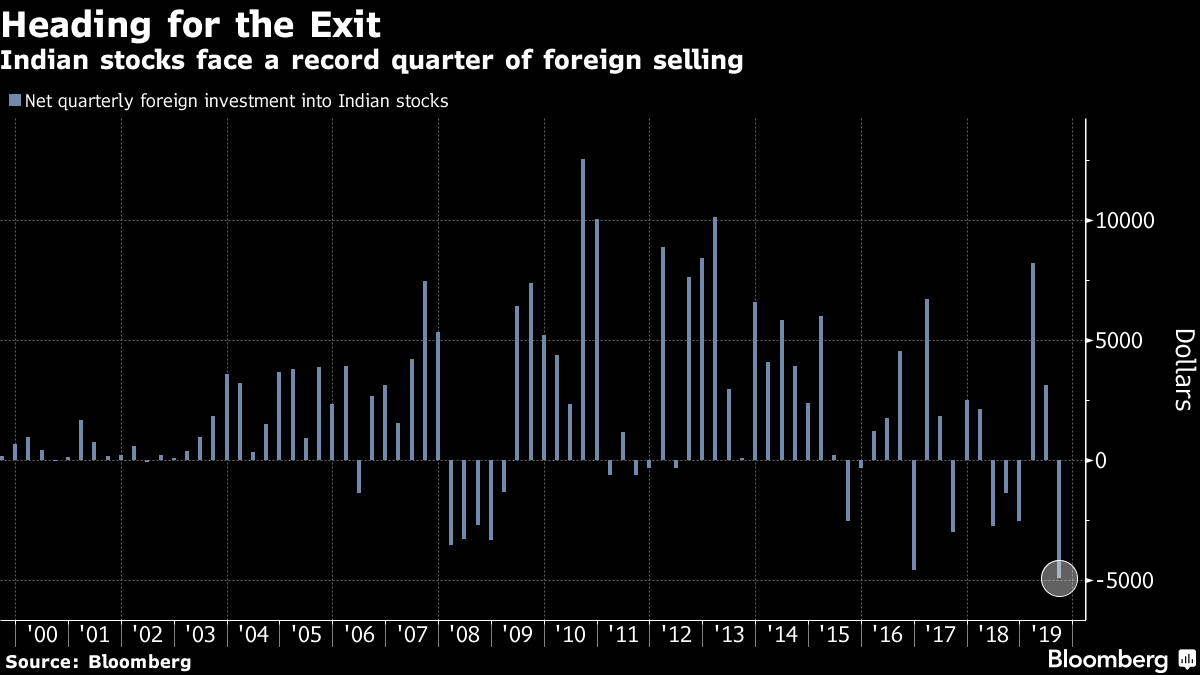 “The euphoria around Modi before 2014 has tapered off,” said Salman Ahmed, the London-based chief investment strategist at Lombard Odier Investment Managers, which oversees about US$52 billion.

It’s hard to fault investors for losing faith. India’s economic growth has decelerated for five straight quarters to the weakest level since early 2013, one year before Modi became prime minister. And the five per cent headline number for the second quarter may actually understate how painful the slowdown has become. Car sales are sinking at the fastest pace on record, capital investment has plunged, the unemployment rate has surged to a 45-year-high and the nation’s banking system is hamstrung by the world’s worst bad-loan ratio. Monday’s oil-price spike adds yet another headwind for a country that imports most of its crude.

While Modi isn’t sitting idly by as the economy weakens, investors say he’s been slow to act on a long list of needed reforms that includes selling stakes in state-owned companies and revamping the nation’s labour laws. The growing worry is that India could be headed for a structural slowdown that pummels the country’s US$2 trillion stock market, throws a wrench into growth plans of international companies from Amazon.com Inc. to Netflix Inc., and makes it increasingly difficult for Modi’s Bharatiya Janata Party to deliver jobs for the millions of young Indians who enter the workforce every year.

Subramanian Swamy, a BJP lawmaker, spoke bluntly about the risks of inaction in an interview with BloombergQuint published Sept. 5: “If the economy is not rectified, Modi has about six more months till people start challenging him.”

Representatives from the prime minister’s office, finance ministry and BJP didn’t respond to requests for comment. India is an attractive investment destination, offering a massive market as well as local talent, political stability and a corruption-free, reform-oriented government, Technology Minister Ravi Shankar Prasad said at an industry event on Monday.

While many of India’s problems pre-date Modi, critics say his handling of the economy has been disappointing. His 2016 decision to invalidate 86 per cent of the country’s currency in circulation is widely regarded as a growth-sapping boondoggle, and his 2017 goods and services tax reform -- passed with bipartisan support -- has since been panned as far too complicated. Modi’s early attempts to simplify land and labor laws were reversed in the face of social and political opposition.

The BJP leader, who turned 69 on Tuesday, has won plaudits for cementing an inflation target that’s kept prices in check, passing a new bankruptcy law and recapitalizing the nation’s troubled lenders. But the revolutionary changes that many investors expected from Modinomics have so far failed to materialize. 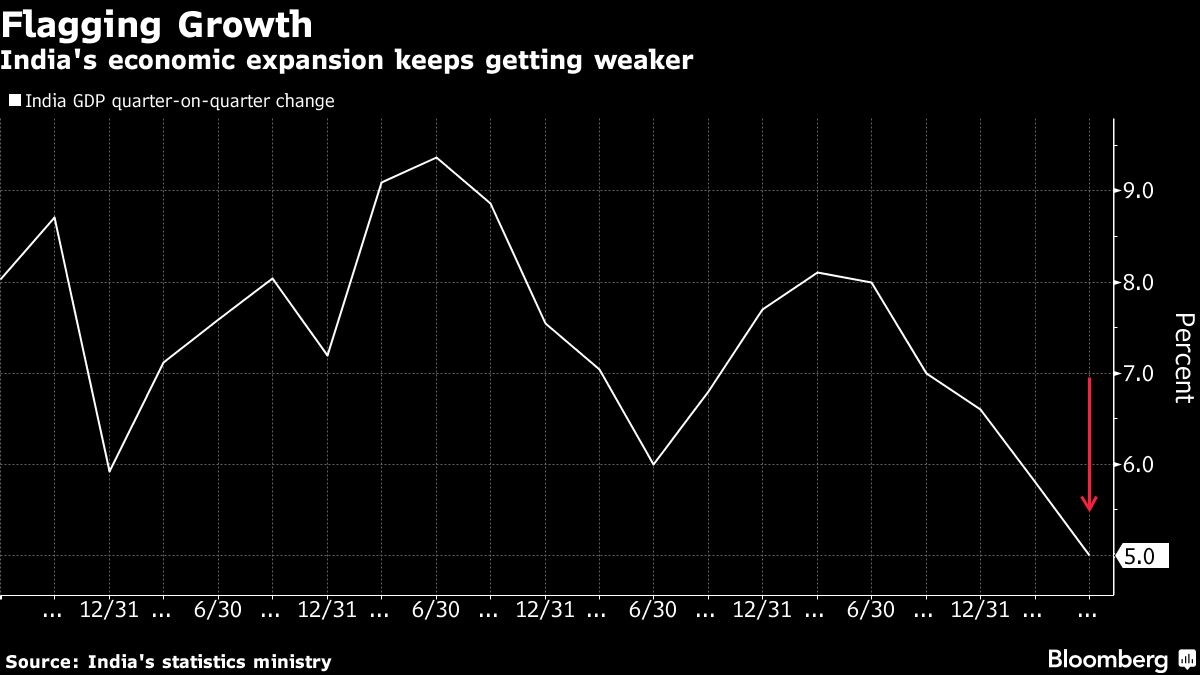 In recent weeks, the government has focused primarily on efforts to shore up short-term growth as the U.S.-China trade war weighs on emerging markets globally. Modi’s administration on Sept. 14 unveiled at least US$7 billion of tax breaks for exporters, adding to measures last month that included tax benefits for vehicle purchases, the rollback of an extra levy on capital gains earned by international funds and an easing of foreign investment rules in sectors including retail, manufacturing and coal mining.

But Modi’s fiscal firepower is limited by the region’s widest budget deficit (including federal and provincial finances) and a bevy of overly indebted state-owned companies. His own advisers have warned that without major reforms, India could face a structural slowdown that keeps long-term growth far below the eight per cent rate that many economists say India needs to create enough new jobs.

“Structural reforms will be critical for higher GDP growth as the government may have largely exhausted the fiscal and monetary options,” said Sanjeev Prasad, an analyst at Kotak Institutional Equities in Mumbai.

The risk is that as the economy slows, reforms will take a back seat to heavy-handed appeals to nationalism. Modi’s latest sweeping election victory in May was fueled by a combination of Hindu nationalism, economic populism and air strikes against arch-rival Pakistan. Last month, he revoked seven decades of autonomy in the disputed state of Kashmir, a move that further escalated tensions with Pakistan and unnerved markets.

“They have spent all this political capital on Kashmir, which is frustrating,” said Katalin Gingold, managing director at Cartica Management, an emerging markets focused hedge fund based in New York. “It seems more important to deal with the economy which looks like it could fall into a vicious cycle.”

High up on investors’ reform wish list: privatize more state-run companies, make it easier to hire and fire workers, loosen government restrictions on land purchases, set up a bad bank to take soured debt off lenders’ balance sheets, and expedite tax refunds to small manufacturers that are getting squeezed by the shakeout in India’s shadow banking system.

Even some long-term Modi supporters aren’t sure he will deliver. Jefferies Financial Group Inc.’s Christopher Wood, author of the widely followed “Greed & Fear” investment strategy report, cut his recommended exposure to Indian stocks on Aug. 22 and advised buying Indonesian equities, writing that he’s “not so sure what Modi can do about the economy in the short term.” As recently as May, Wood had called Modi the “most pro-growth leader in the world.”

The MSCI India Index has dropped nine per cent from its all-time high in August 2018, cutting the gauge’s longstanding valuation premium over the MSCI All-Country World Index to the narrowest level since 2004. The Indian gauge now has a price-to-book ratio of 2.5, or 13 per cent higher than the global measure. When Modi entered office, the premium was nearly 30 per cent. 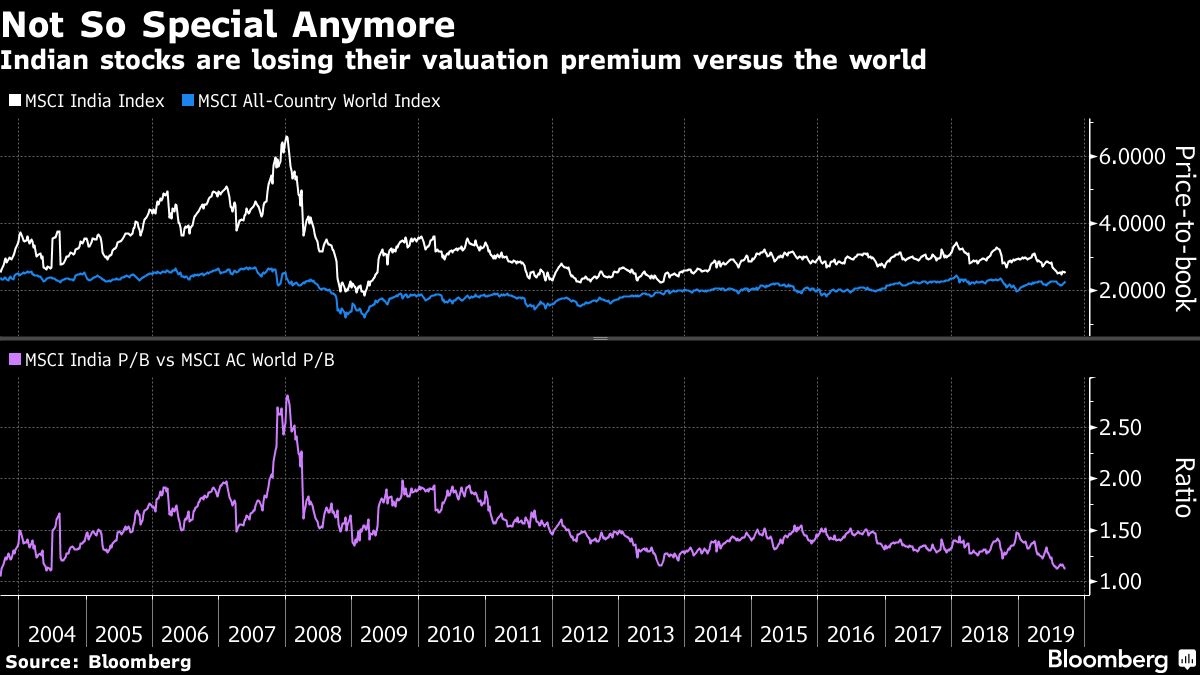 It’s not just investors that are turning more downbeat on Asia’s third-largest economy. Public expressions of pessimism from the nation’s corporate leaders, rare in the early years of Modi’s tenure, have become increasingly common.

Sanjiv Mehta, chairman of Hindustan Unilever Ltd., one of India’s biggest consumer-products producers, warned in May that the soaps and shampoos his company makes are “recession-resistant, but not recession-proof.” Guenter Butschek, chief executive officer at Tata Motors Ltd., said Sept. 5 that the Indian auto industry growth story “is about to collapse.” Vehicle makers contribute about half of national manufacturing output and are among India’s biggest employers.

“Absent a fast response from the government, the private sector risks facing a prolonged slowdown,” said Maupassant Chachra, an economist at Morgan Stanley who recently cut her growth forecast for India.