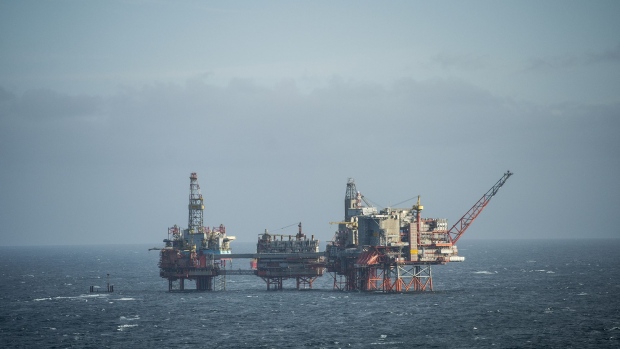 The Maersk Reacher rig in the Valhall field in the North Sea. Photographer: Carina Johansen/Bloomberg , Bloomberg

If you really want to reform the fossil-fuel economy, you have to do it from the inside, according to the head of investments at Danske Bank A/S’s US$70 billion pension fund.

“Buying green assets will make us go some of the way,” Kobberup said in an interview. “However, we will need to see companies and sectors transition to a low-carbon economy as well.”

It’s a conversation that’s existed since ESG investing became a thing. Some believe the best way to shape behavior is by withholding money. Others say that forcing change from within is a better way to force lasting environmental, social and governance improvements.

Danica wants its portfolios to be carbon-neutral by 2050. As part of the strategy, Kobberup says he plans to hold on to companies like Maersk Drilling A/S, and others that make their money by engaging in polluting activities.

Danica is on track to hit an interim target of 100 billion kroner (US$15 billion) in climate-related investments by 2030, Kobberup said.

“That was a quite high number a year ago, and now I believe we will be way ahead,” he said. “It’s in all assets that we can see the movements going very fast at the moment. It’s in the companies and it’s in their products, and it’s in the consumer sentiment.”

Like other institutional investors, Danica doesn’t invest in tobacco or weapons manufacturers, and shuns firms that get a large part of their revenue from tar sand and thermal coal.

“We selectively go for green bonds, which is pretty easy, depending on the price and market,” Kobberup said. But staying invested in carbon emitters “will get the most impact on reducing CO2: that the companies are going ahead and turning their companies around.”

He says Orsted A/S is an example of how polluters can change. The wind-park operator started out as an oil and gas producer, but has now become one of the ESG darlings. It’s why Danica isn’t planning to sell Maersk Drilling, he said.

“If we see companies do things like that, and have clear strategies for going the right way, then it’s definitely not something that should be on our exclusion list,” he said.

Companies or investments that contribute to the transition to a low-carbon, resilient and resource-efficient economy by mitigating or preventing environment damage. They’re not necessarily CO2 neutral themselves, but may produce products like insulation that will enable lower CO2 footprints.