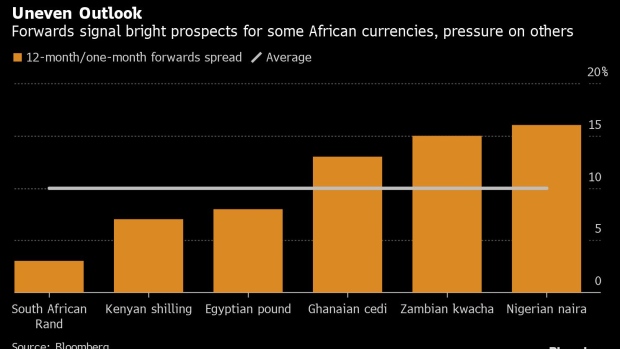 A vendor wearing protective latex gloves counts out Nigerian naira banknotes in a store in Lugbe district in Abuja, Nigeria, on Wednesday, June 3, 2020. The government of Nigeria, whose revenue could be slashed by more than half this year due to the oil-price slump, finalized plans for a revised budget that keeps spending almost intact, and that will mean more borrowing. Photographer: KC Nwakalor/Bloomberg , Bloomberg

(Bloomberg) -- Nigeria, under pressure from multilateral lenders, has vowed to untangle its Byzantine foreign-exchange regime that deters investment in Africa’s biggest economy. But the slow pace of change signals the path to a single rate could be long and confusing for investors.

The collapse of oil prices in March forced the central bank to take the first step, adjusting its official currency peg against the dollar to 360 naira from 307 naira. Before this move, the rate had been relatively unchanged since 2015.

The devaluation was also a nod to the International Monetary Fund, from which the West African nation was seeking a $3.4 billion emergency loan. The Fund approved the loan after Nigeria promised to seek a unified and more flexible exchange rate, even though that was not a precondition. Authorities are also in talks with the World Bank for another loan needed to cover its budget gap.

A multiplicity of rates

Besides the official exchange rate, used mainly for government transactions and the budget, Nigeria maintains a number of other rates.

The central bank devalued the official rate a second time by 5.5% to 381 per dollar this week on the FMDQ OTC Securities exchange, the country’s largest currency and debt trading platform. But the bank has not yet officially announced the new rate, causing confusion among traders. The central bank maintains 360 naira to the dollar as the official rate on its website and President Muhammadu Buhari signed a revised 10.8 trillion naira 2020 budget based on this figure.

Why all the different rates?

Price stability is a key aim of Nigeria’s central-bank policy. A weaker naira could stoke inflation, which at 12.4% in May is already at a two-year high and well above the target-range ceiling of 9%.

The central bank aims to curb inflation by using the stronger official rate for imports of items like fuel that have an impact on prices. Africa’s largest oil producer imports almost all of its gasoline because its three derelict refineries have not processed any crude for more than a year. Electricity tariffs, which the government subsidizes, are also linked to the dollar and a weaker naira would lead to a significant rise, fueling inflation.

The cost of uncertainty

Africa’s most populous country has the widest spread between 12-month currency forwards and one-month contracts among its peers on the continent, suggesting traders expect a large depreciation. That increases the risk of holding Nigerian assets and deters foreign investors.

“What is important for investors is predictability around the rate, that they don’t wake up one day and find the market has moved without explanation,” said Yewande Sadiku, the head of the Nigerian Investment Promotion Commission.

There is also a revenue cost to the government. Using the official rate of 360 to convert crude-oil earnings to naira, rather than the Nafex rate of 388, costs the government about 5% in additional revenues for every barrel of oil sold. It will also reduce the local-currency value of every dollar of IMF or World Bank money that arrives in the country.

So, what is a fair value for the naira?

There are more views on fair value for the naira than exchange rates. Central-bank Governor Godwin Emefiele has said the bank aims to unify the different rates around the 388 Nafex rate. Many investors and analysts believe that the currency is still far from its true value.

The naira should be anywhere between 427 naira and 491 naira to the dollar, converging with the black-market rate, Renaissance Capital said in a note to clients on July 7. It could depreciate even more if the unofficial rate weakens further, and when the central bank lifts restrictions on access to dollars, which has created a hard currency shortage hurting local importers.

“The question now is how much further does the official rate need to fall to match the unofficial level?” Murega Mungai, trading desk manager at currency broker AZA, said in a note to clients. “The journey towards unification will be a series of gradual, subtle steps.”