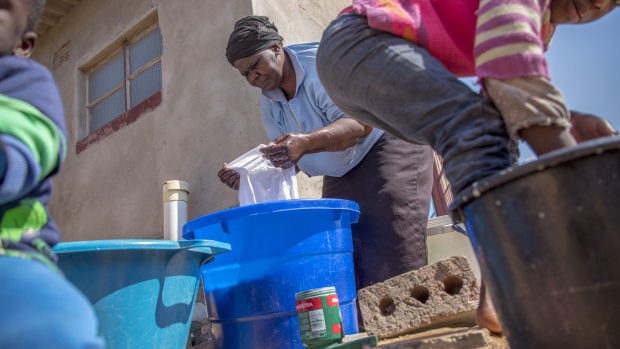 (Bloomberg) -- Trudging home along a dusty street in the Zimbabwean city of Bulawayo, Sikhathele Ndlovu balances a 20-liter (5-gallon) bucket of water on her head, a ritual she’s performed daily for almost a decade. Persistent drought on top of existing faulty piping means there’s little prospect of an end to her back-breaking trek to the communal borehole.

“Nothing comes from the pipes to our homes now,” the 51-year-old widow said during a break on her 20-minute journey through the city’s Cowdray Park township. “Open the tap and not even a drip.”

Ndlovu is one of tens of thousands of Zimbabweans, most of them women, forced to lug water from boreholes or wells as piping, pumping stations and other infrastructure crumbles. Their plight is being aggravated by what the Zimbabwe Farmers Union says is the worst dry spell in at least three years.

Zimbabwe is in the grip of a nationwide drought that’s depleted dams, cut output by hydropower plants, caused harvests to fail and prompted the government to appeal for $464 million in aid to stave off famine. It’s disastrous for a nation whose economy has been driven to the brink of collapse by two decades of mismanagement, meaning the authorities can’t afford to effect repairs, let alone extend water access to a burgeoning urban population.

The effects are already being felt in other African cities including Cape Town in neighboring South Africa and Maputo, Mozambique’s capital. Both have been plagued by water shortages brought on by drought, population growth, urbanization and insufficient investment in dams and other infrastructure.

“Climate change does not see boundaries or borders,” said Tich Zinyemba, head of the public weather service at Zimbabwe’s Meteorological Service Department. “Some of the things which we are seeing now such as prolonged droughts, dry spells are as a result of climate change.”

The consequences are plain to see in Zimbabwe’s second city of Bulawayo, in the west of the country. Once a thriving industrial hub, most manufacturing has come to a standstill and the city council has begun rationing water from the pumps and pipes that still work in a bid to stretch supplies until November when the rainy season normally begins.

“We’re hoping that by rationing, people will adjust so that we can continue supplying water,” said Simela Dube, the council’s director of engineering services. The city is targeting a reduction in consumption of about 20% per day.

Many of Bulawayo’s 1.5 million residents who do still have access to piped water can’t afford it—less than 10% of Zimbabwe’s workforce has formal employment—and resort to using free communal supplies when their homes are cut off for not paying.

“We are back in the olden days, but now it’s worse because everyone’s broke,” said Jessica Moyo, 60, as she pushed a barrow laden with empty containers to collect water from a shared faucet in Bulawayo’s Khumalo township, her grandson, Mikey, shuffling behind her. “Not one person in my family has a job. We live hand-to-mouth selling some tomatoes and cabbages.”

Bulawayo will need at least $522 million over the next two decades to repair and upgrade its existing water and sewer systems, according to Mercy Ncube, the city’s engineer. The council and debt-stricken central government doesn’t have the money and even if it can somehow be raised, it won’t alleviate the current supply deficit.

A plan to build a 384-kilometer (240-mile) pipeline to bring water from the Zambezi River to Bulawayo—costed at about $5 billion a decade ago—was never implemented. While the central government, which is dominated by Shona-speaking officials, say the outlay was prohibitive, many residents of Bulawayo and the surrounding Matabeleland provinces say the inaction amounts to deliberate discrimination against their minority ethnic Ndebele group.

The water crisis is not as acute in Harare, Zimbabwe’s capital, which typically has more rain that Bulawayo. But even here, some of its suburbs haven’t had piped water for a decade.

Globally more than 2 billion people live in countries experiencing high water stress, and the UN warns the problem is set to worsen, with demand expected to grow as much as 30% by 2050.

Ndlovu, the Bulawayo widow, is testimony to the hardship that will bring.

“Life here goes backwards,” she said. “First there was no water, now there’s usually no electricity. That’s our life now.”

To contact the editor responsible for this story: Paul Richardson at pmrichardson@bloomberg.net, Alan CrawfordMichael Cohen