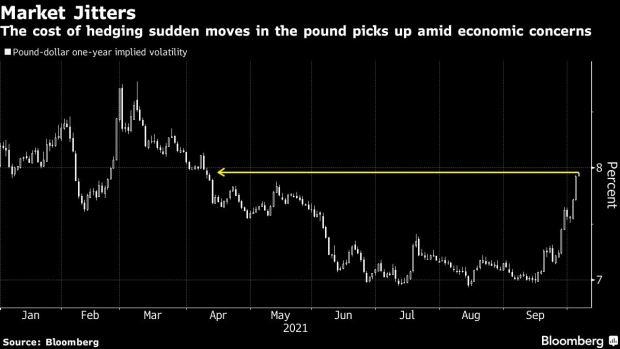 A supply chain crisis, sky-rocketing energy prices, inflation expectations at historic highs. It’s easy to see why the case against U.K. is catching on.

Options traders are bracing for the currency to weaken, and big investors have turned bearish. Goldman Sachs Asset Management has been underweight the pound since the summer and BlueBay Asset Management LLP’s Mark Dowding sees a risk of a 10% decline in the next six months.

“Supply constraints and a potential winter of discontent are weighing on the pound,” said Neil Jones, head of foreign-exchange sales to financial institutions at Mizuho Bank.

Here’s three metrics that show pessimism on the pound:

Traders are increasingly betting that the purchasing power of the pound is going to be eroded. The U.K.’s 10-year breakeven rate, a market-based measure of expected inflation, topped 4% on Wednesday, the highest since 2008.

It’s Getting Expensive to Hedge the Pound

The cost of hedging swings in the pound over the next year has jumped to the highest since April.

There’s a lot of demand for options that bet on a weaker pound. Three-month risk reversals, a gauge of market positioning and sentiment, show that the appetite for bearish wagers is near the strongest since March.