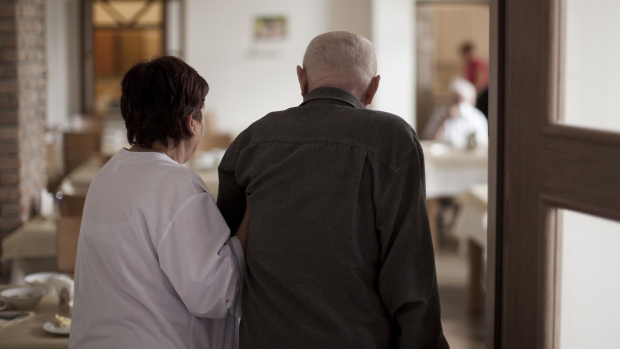 (Bloomberg) -- Chippewa Manor’s beds could be full. The nursing and rehabilitation home is seeing plenty of demand from potential patients, after two nearby facilities recently closed. But there’s one problem: There’s no one to care for residents.

Staffing has always been a challenge, but “it’s reached a boiling point” in the last six months, said Jill Gengler, the president of the northwest Wisconsin facility. The home has struggled to find nurses, laundry, maintenance, housekeeping and food-service workers. Raising the wage for certified nursing assistants to $17 an hour from $12 has brought in some new staffers, but the pay rate is “not sustainable.”

As a result, Chippewa Manor is turning away other possible clients who might bolster revenue that would help fund higher pay.

It all spells disaster for US nursing homes, an industry that was under financial pressure even before the pandemic. Declining enrollment and higher labor and supply costs have forced 327 nursing homes to shut down since 2020, and more than 400, or about 3% of certified homes in the U.S., are at risk of closing this year, according to the American Health Care Association, an industry lobbying group.

“The industry itself is on the brink of collapse,” said David Gordon, who leads the distressed health-care practice at law firm Polsinelli.

The coming upheaval will also weigh on the so-called sandwich generation, those squeezed between caring for their children and aging parents, often while juggling their own careers. More than half of adults over 65 will need care for serious disabilities, according to a government report, and the U.S. Census Bureau expects that older adults will outnumber children by 2034 for the first time ever.

The median occupancy rate at skilled nursing facilities, historically around 90%, is forecasted to be 77% for the year, according to a March report from AHCA. And most homes are losing money, with an expected median operating margin of negative 4.8%.

That’s a huge difference from the strongest financially performing nursing homes that saw up to 10% returns before the pandemic, said John Tishler, who specializes in transactions involving distressed and bankrupt health-care facilities at Nashville law firm Waller Lansden Dortch & Davis.The pandemic revealed and amplified long-existing shortcomings at the more than 15,000 nursing homes in the US, such as inadequate staffing, poor infection control and regulatory failures, according to an April report from the National Academy of Sciences. As of last month, more than 150,000 nursing home residents and 2,362 workers had died from Covid-19, according to the Centers for Medicare and Medicaid.

While buyers in the space come in “thinking they can build a better mousetrap,” the complexity and economic pressures along with a move toward more home care will likely lead to more restructurings and closures similar to the wave that followed the 2008 recession — with the most trouble concentrated in privately owned facilities, said Thad Wilson, a restructuring lawyer at King & Spalding.

Even in normal times, experts say, there needs to be a rethinking of how the facilities are financed.

“All of the reimbursement systems are inadequate across the board,” said Suzanne Koenig, a nursing home turnaround expert and head of SAK Management Services who has served as a receiver and Chapter 11 trustee in bankruptcy cases. The Centers for Medicare and Medicaid Services’ proposed 4.6% Medicare reimbursement cut next year would affect payments that cover shorter-term rehab patients, who account for a significant portion of nursing home stays. Medicaid, meanwhile, funds most long-term care.

About 70% of nursing homes in the US are owned by for-profit operators, including large chains, smaller investor groups, mom-and-pops, and increasingly, private-equity firms, who have been a driving force in the consolidation of a still-fragmented industry.

Publicly financed facilities — and their creditors — have their own issues, too. Municipal bonds issued for nonprofit owners of senior living facilities, including nursing homes, make up almost 75% of the $560 million municipal bond defaults this year, according to data compiled by Bloomberg. Last year, $1.1 billion of those bonds defaulted, accounting for 60% of defaults in the municipal bond market.

Complicating the situation is the scattered nature of bondholders when publicly financed facilities need to restructure, Polsinelli’s Gordon said, making negotiating and reaching an agreement difficult even when there are willing buyers. That means that some facilities that might have been saved end up closing.

The goal for bankrupt facilities is usually to sell to a new operator, but that isn't always possible, or a buyer doesn't want all the locations.

As nursing homes struggle to operate in the black, proposed rules from the White House meant to improve care include new requirements on staffing levels that could present another obstacle for an industry already struggling to find workers.

Roughly 236,000 caregivers, or 15% of the nursing home workforce, left the sector since the start of the pandemic through February, according to the Bureau of Labor Statistics. Burned-out workers are not being tempted by raises. Their wages jumped 19% between January 2020 and January 2022, BLS data show. But other industries have raised pay, too.

“You can go work at the Walmart down the street and get paid more and not deal with Covid all day,” Gordon said.

For rural facilities, the situation is even more urgent. Like rural hospitals, they’re often located in areas with stagnant or declining populations.

Experts from the Academy of Sciences say the nursing home industry needs a complete overhaul from emergency preparedness to new standards for staff and better oversight and regulatory enforcement. A report from the nonprofit also suggests the federal government study a new long-term care benefit. The current system, according to the report, is “ineffective, inefficient, fragmented and unsustainable.”

Until then, operators are just trying to find nurses and support staff to keep their facilities running. But even with incentives — some centers are offering a free vacation day for every three weeks worked, said Kelly Arduino, head of the health-care practice at advisory firm Wipfli — job applicants aren’t coming forward.

“We just can’t even remember a situation where it’s been harder,” she said.