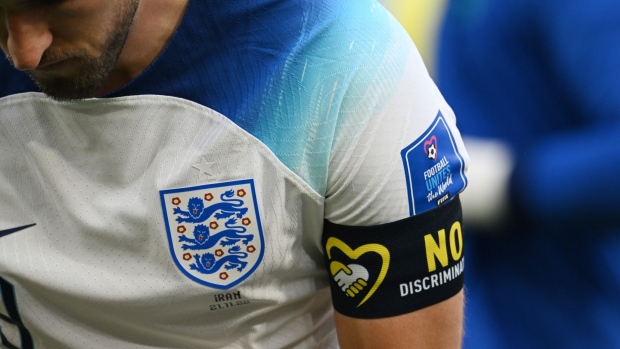 (Bloomberg) -- They call soccer the beautiful game, and spectacular moments from its greatest showcase, the World Cup, linger in the mind’s eye like jewels.

Think of Geoff Hurst taking the roof off the net at Wembley to clinch England’s only triumph in 1966; or Argentina’s Diego Maradona dancing the tango with England’s defenders in 1986 before scoring the finest goal in the competition’s history.

Some sports can be conjured from their statistics: baseball, cricket. But soccer -- or football, as most of the world knows it -- comes alive in eye-catching instants, seconds of unforgettable drama.

This has been true of the early stages of the Qatar tournament, though not necessarily in the way the commentators were expecting. So far, it has been a theater of symbolism, and a global audience of millions has witnessed extraordinary political gestures - as well as registering the ones that didn’t, in the end, come off. The competition has been a vivid reminder that silent messages are the communiques of the powerless, and often, strikingly effective ones.

Before their opening match against England, the Iranian team declined to sing their national anthem, a courageous act of insubordination intended for the eyes of the theocracy in Tehran, and the team’s hard-pressed supporters at home. It followed months of unrest over the death of a young Iranian woman, Mahsa Amini, who was arrested by the country’s “morality police” for allegedly transgressing stringent dress codes. The Iranian authorities say she died of a heart attack, but many believe she was murdered, fatally beaten in police custody.

In the UK, the Anglo-Iranian comedian and actor Omid Djalili urged England’s players to mime cutting their hair when they scored a goal. The “hair snip” has become a symbol of defiance in Iran, where women have cut their hair and burned their hijabs.

The team hasn’t adopted the gesture. But the players took the knee before the kick-off against Iran. This act of silent protest is now an established feature of Premier League matches in England, though it has its critics in the UK and the US, where it originated.

The England captain, Harry Kane, and his Welsh counterpart Gareth Bale, had indicated they wanted to wear a “One Love” armband in matches. Many hoped to see this as an expression of solidarity with the people in Qatar (and elsewhere) who face severe penalties for expressing their sexuality in public. But FIFA, world football’s governing body, warned that a player displaying such a symbol could expect a penalty in the form of a booking. FIFA has authorized “No discrimination” armbands instead.

Here was a flurry of potent imagery in the mix at England versus Iran, and all before a ball had been kicked!

For those without a voice, the mute protest is a forceful statement of opposition. There’s a powerful implacability about it. The mothers of the disappeared in Chile had worldwide attention in the 1970s after wordlessly holding up photographs of their lost children. Peaceful protests in Tahrir Square, Egypt, in 2011 helped to bring about the downfall of President Mubarak, who became the first Arab leader to be tried in a civil court like any other citizen.

The unvoiced reproof has also found its way into the art of societies where dissent can’t be spoken plainly. In 2008, the Chinese humanitarian and artist Ai Weiwei, who today lives in Portugal, was sufficiently acceptable to the Beijing government to work on the Bird’s Nest Stadium for the Olympics, the only rival to the World Cup as the planet’s biggest sporting attraction.

But while he was living and working in China, Ai also embarked on a series of pots with a slyly satirical message. His Coca-Cola Vases combine the logo of the ubiquitous soda with ceramics produced in the tradition of Ai’s homeland. Without ever making his point explicitly, the artist was critiquing a Chinese regime caught between the country’s long past and the exigencies of international capitalism. In this, Ai was saying things that he can only put into words now that he lives abroad.

Reaching an accommodation with a ruling elite, which is sensitive to any slight, real or imagined, has been a ticklish challenge throughout art history. The Spanish master Goya is often described as a court artist, as if he had been a lapdog of the Madrid monarchy. But many critics say that his group portrait of a dyspeptic-looking ruling dynasty, “Charles V of Spain and his Family” (1800-01), is an eye-popping takedown of a weak and cuckolded king and his relatives.

The picture is also an homage to the all-time masterpiece of Spanish court art, Velazquez’s “Las Meninas” (1656). If Goya’s offering isn’t quite in the same league, well, neither was the selection of royals available to him, or so the artist appears to be saying.

The Russian composer Dmitri Shostakovich was one of the bravest men who ever lived. Despite an ever-present fear of death or banishment to the gulag, which was the fate of so many artists during Stalin’s “Great Terror,” Shostakovich smuggled mocking tropes into his music: His gestures of resistance were audible, of course, but the composer’s gamble was that the coarse and brutish dictator didn’t have the ears to hear them.

Jews were a particular target for liquidation, but Shostakovich, who was a gentile, introduced Jewish musical elements into his compositions, including the klezmer-like music in the finale of his “Piano Trio No. 2,” for piano, violin and cello. In 1948, when Stalin’s goons were rounding up Russia’s Jewish writers, poets and actors, Shostakovich composed the song cycle “From Jewish Folk Poetry.” It included pieces that a Jewish audience would have understood as a response to the hardship of practicing their faith in the Soviet Union.

Such music was a provocative act, a direct rebuke to Stalin. Anticipating arrest, Shostakovich kept a suitcase packed and slept in the stairwell of his apartment building, so that the KGB wouldn’t disturb his family home when they took him. But he outlived the tyrant by more than 20 years, dying of natural causes in Moscow in 1975.

A postscript on silence comes from the philosopher Ludwig Wittgenstein - not a name you’d expect to be conjuring with on the weekend. One of the Austrian-British thinker’s best-known sayings seems pertinent to the acts of Iranian footballers and subversive artists alike. He said, “Whereof one cannot speak, thereof one must be silent.”

Academics have pored over this gnomic pronouncement for decades. Was Wittgenstein encouraging us to button our lips about ineffable matters that lie beyond human comprehension? Whatever he intended, it could serve as a credo for non-verbal resistance, as the last word on the protests that go unspoken.