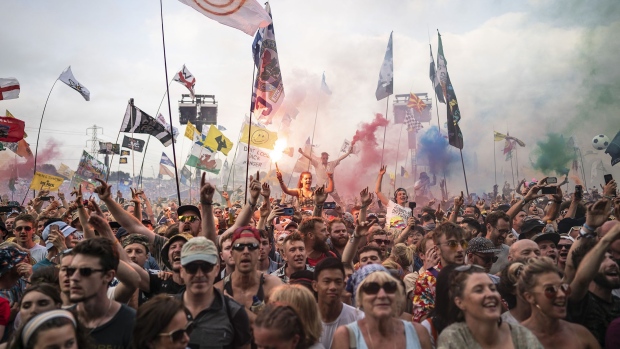 The list of canned crowd-thrillers that were planned for the coming weeks isn’t just bad news for event organizers, sports groups, entertainers and the like. The financial fallout has dealt a crippling blow to an industry that claimed to have averted the pandemic at its onset.

Insurers are on the hook for billions of dollars to bail out organizers of events such as Wimbledon’s iconic tennis clash after the virus ended mass gatherings. Lloyd’s of London, the world’s largest insurance exchange, says such claims will comprise the biggest portion of members’ total payout for the pandemic, potentially the costliest crisis in its 330-year history.

“There are pandemic-type exposures that have occurred in the past that have caused things, events, sports to be canceled,” said Richard Tolley, deputy leader of the global events and sports practice at Marsh, the world’s largest insurance broker. “But nowhere near on this scale.”

A tennis-free British summer and an empty Tokyo stadium are just the start of insurers’ nightmares. While pulled events and travel plans have sparked the more immediate claims for firms including AXA SA and Allianz SE, a flood of further payouts is coming as businesses from Seattle to Sydney lose revenue to lockdowns. Lloyd’s says the crisis could cost insurers more than $200 billion.

The reality: nobody can really predict how this ends.

“Because this is such a once-in-a-generation situation, the wordings were not written specifically to account for circumstances which are evolving daily,” said Tim Thornhill, director of sales for entertainment and sport at Lloyd’s broker Tysers Insurance Brokers.

In a two-punch blow, the torrent of claims is coming on top of the destruction to investment portfolios that insurers have amassed in recent years. Lloyd’s estimates that almost half of the industry’s global losses will come from firms’ bonds and real estate assets amid the market wreckage wrought by the pandemic.

If that wasn’t enough, the industry now has to factor in the impact of rioting in the U.S., which will likely add to the list of liabilities in this unprecedented year.

For the first time since World War II, the seats of Wimbledon’s lawn courts will remain empty at the end of this month. But the organizers planned ahead, and are to receive a payout of more than 100 million pounds ($127 million) from their insurer, according to media reports. This month would have also been the 50th anniversary of Glastonbury, the outdoor festival that was to be headlined by ex-Beatle McCartney, but was recently forced to cancel.

Other circumstances aren’t so cut and dry. In December, Japan’s government proudly unveiled the stadium that would hold the Olympics, this year’s biggest event. Just a few months later, as country after country pulled out, Prime Minister Shinzo Abe and the International Olympic Committee agreed to postpone the July games until 2021 instead of canceling the four-yearly spectacular.

After playing down the virus’s potential impact just a few months ago, insurers have since declared large financial hits and warned of far worse to come. France’s AXA last month estimated that event cancellation claims alone would be in the “mid-triple-digit-million euros” and it was too early to predict the amount for business interruption. Germany’s Allianz said it suffered a 700 million-euro ($794 million) hit from the pandemic in the first quarter.

And for any organizers planning to quickly protect themselves against a potential second wave of the coronavirus — good luck.

“The reality is at the moment, there is no insurer out there offering communicable disease cover on an event cancellation policy,” said Marsh’s Tolley.

In the U.S., firms are preparing for the worst. While it’s not clear which acts had coverage, music royalty including the Rolling Stones, Bob Dylan and Elton John were all forced to either cancel or postpone huge American tours this year. The Burning Man festival, meanwhile, will move from the Nevada desert to online.

At the same time, aggrieved businesses from restaurants in Dallas to Native American casino owners are preparing a flood of lawsuits against the nation’s insurers.

Two well-known industry bosses, Chubb Ltd.’s Evan Greenberg and American International Group Inc.’s Brian Duperreault, have both said the pandemic will likely be the largest catastrophe in the history of insurance.

What’s unique about the pandemic compared with disasters like hurricanes that the industry routinely covers is its sheer breadth. The outbreak isn’t confined to one geographical location and its duration nowhere near as limited as traditional events, according to Peter Zaffino, AIG’s president.

“The profound impact and global nature of Covid-19 is something we have never encountered,” Zaffino said May 5 on AIG’s first-quarter earnings call. “There’s no playbook.”

The industry will be challenged further in the coming months as a debate over business interruption coverage grows increasingly hostile. Some insurers had specifically excluded losses from viruses, while many argue that coverage requires actual physical damage to spur a payout.

Abraham Salum opened his namesake restaurant in Dallas nearly 15 years ago. He shifted his business to deliveries and takeouts under lockdown, but lost a big chunk of revenue he’d normally get from catering and alcohol sales, he said. After seeking coverage on its Travelers Cos. policy, Salum Restaurant ended up filing a lawsuit against the insurer in late April when the claim was refused.

An insurance policy “is supposed to give you piece of mind, it’s supposed to help you when you need it,” Salum said. “It feels you have absolutely no power against the behemoth that is an insurance company.”

Travelers said in an emailed statement that while the situation is “enormously difficult” for firms and individuals, it can’t pay for losses that a policy excluded.

For some, the debate has taken an alarming turn. Some U.S. state legislators have considered bills that would require insurers to cover business interruption for small companies, even if the policies had previously excluded virus-related losses. That’s spurred a huge pushback from the industry.

Trade group American Property Casualty Insurance Association estimates that closure losses just for small businesses could be as much as $431 billion per month.

The U.K.’s top markets regulator last month said it was seeking legal clarification on how insurers handle corporate claims. The issues came to the fore after insurer Hiscox Ltd. refused coronavirus claims even though clients said they were covered against infectious disease.

In Europe, AXA was recently ordered by a Paris court to compensate a restaurant owner for two months of virus-related losses. While the firm will appeal, its initial defeat will influence business interruption claims across the globe, Bloomberg Intelligence analyst Sarah Jane Mahmud wrote.

Governments in the region have also been forced to backstop the credit insurance market, with Germany, the U.K. and Belgium stumping up billions to protect firms against supplier defaults.

But one insurance market is so far holding up: China, where the pandemic began. Direct payouts have been muted given the nation’s low insurance coverage, though social-distancing measures have disrupted sales of new policies and slashed premiums industry-wide.

Still, companies are firmly on their guard. Smaller insurers with heavy exposure to credit guarantee coverage could especially see a “devastating” impact if big online lending platforms collapse amid risks that would accompany “the secondary disasters or the aftermath” of the pandemic, Nomura analyst Tang Shengbo said last month.

As the world’s economies emerge from lockdown, the future is heavy with uncertainty. But there’s growing optimism that next year could see some kind of normality and everything will be back on. The organizers of Glastonbury are already planning and preparing for the 2021 festival, according to a spokesperson.

For insurers, however, the industry remains firmly in the realm of uncharted territory.

The pandemic’s impact “feels like a domino beginning to fall,” said Stephen Cross, founder and head of strategy and innovation at London insurance broker McGill & Partners Ltd. “And we don’t know how many dominoes will fall.”