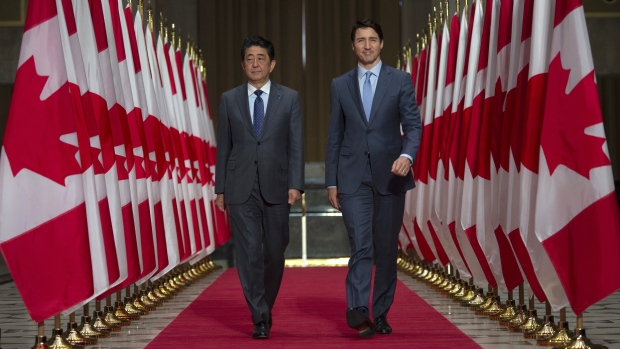 Canada finds itself between a rock and a hard place with the United States and China: the Trump administration is holding firm on punitive metal tariffs while the People's Republic's ongoing imprisonment of two Canadian men following the arrest of Huawei's chief financial officer in Vancouver has thwarted the Trudeau government's Asian trade ambitions.

Abe was greeted by Prime Minister Justin Trudeau on Parliament Hill on Sunday, and the two will celebrate their successful launch late last year of the rebooted Trans-Pacific Partnership -- the 11-country Pacific Rim trade alliance that was rescued after President Donald Trump withdrew the U.S. from it in January 2017, nearly killing it.

The two countries are also charter members of another international club that doesn't include the U.S.: the Alliance for Multilateralism, a French-German initiative aimed at supporting the post-Second World War architecture -- the United Nations, NATO, the World Trade Organization, and other groups -- to which Trump has taken a wrecking ball.

Abe is to host the G20 summit in June and will join Trudeau at the G7 leaders' gathering in France in late August, and while Trump's seat at those two multilateral tables is guaranteed, continuing U.S. participation is no longer a given with its mercurial president.

International Trade Minister Jim Carr, who met Abe in Japan in January and will accompany Trudeau on Sunday, said the summit is about reinforcing strong Japanese-Canadian ties that have only flourished more since the new TPP.

"The Americans chose for their own reasons not to be part of that group," Carr said in an interview Saturday.

"Our interest is to take advantage of the ratification of this agreement in our countries, to deepen the trading relationship, which we are already doing," he said, citing increased exports of Canadian beef, pork and heavy machinery to Japan.

Abe arrived in Ottawa on Saturday, hours after playing a round of golf with Trump at his Virginia course on a visit that demonstrated personal bonhomie but bore no fruit towards advancing a U.S.-Japan trade deal to replace the TPP that Trump abandoned.

Japan, like Canada, is also suffering under Trump's punitive tariffs on steel and aluminum imports, and is facing the threat of more tariffs on its automobiles. Trudeau and his cabinet have branded the Trump tariffs illegal and insulting.

Carr said the Abe-Trudeau bond is also strong and that it will help "set the stage" for this summer's round of multilateral summitry -- foreign trips that will be Trudeau's last before Parliament breaks in June ahead of the October election.

"We are agreed that the rules-based multilateral trading order is in the interest of all of those nations who have benefited from post-war freer trading relationships among countries. We believe that rules-based trading systems create growth and create jobs," said Carr.

Carr will join Abe and Trudeau for a luncheon with business leaders before departing Ottawa.