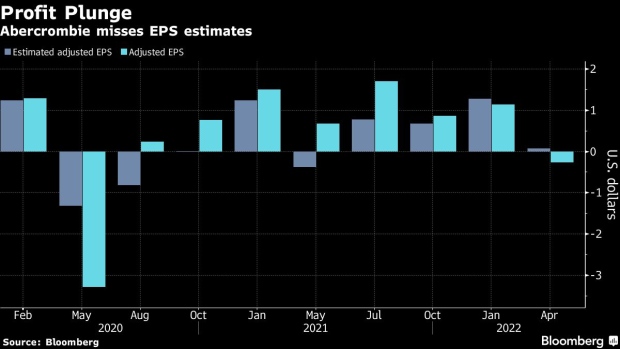 (Bloomberg) -- Shares of Abercrombie & Fitch Co. had their worst drop ever after the apparel retailer reported a loss for its latest quarter and lowered its annual outlook as freight and raw-materials costs weighed on margins.

The stock sank 29% in New York on Tuesday, the biggest plunge since it began trading in 1996. The shares have now fallen 45% this year.

Like retail giants Walmart Inc. and Target Corp., Abercrombie saw robust sales as US consumers opened their wallets despite the highest inflation in four decades. But it wasn’t enough to maintain profitability. The owner of the Hollister brand reported an adjusted loss per share of 27 cents in the quarter ended May 1, instead of the 6.4-cent profit projected by the average analyst estimate in a Bloomberg survey.

Abercrombie now sees this year’s total sales in a range of flat to up 2% -- a reduction of 2 percentage points from the previous view. It also lowered its expected operating margin to a range of 5% to 6%, down from 7% to 8%.

The results are the latest example of how rising prices are eating into companies’ profits. Abercrombie’s guidance adjustment follows similar moves by Kohl’s Corp., Target, Walmart and others -- showing that the period of rapid growth during the pandemic is waning.

In a statement, Chief Executive Officer Fran Horowitz said the retailer expects higher costs to persist until the end of the year. It expects second-quarter net sales to fall by a low-single-digit percentage, citing adverse impacts from currencies, lockdowns in China and suppressed demand amid accelerating inflation.

Abercrombie also finds itself flush with goods just as customers redirect their spending toward necessities and services like travel and restaurants, with inventories up 45% over the previous year. In an earnings call with analysts, executives said they expect inventory levels to remain elevated for the rest of the year as Abercrombie takes in more products to stay ahead of supply-chain snags.

Abercrombie’s stock slump dragged other apparel retailers with it, sinking shares of Gap Inc., which reports on May 26, as well as American Eagle Outfitters Inc. and Urban Outfitters Inc.

(Updates with closing share move in first and second paragraphs.)