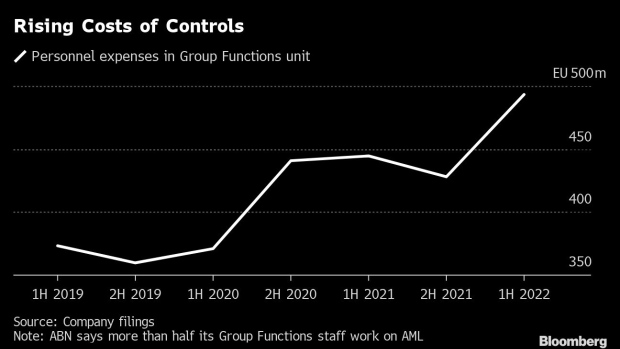 (Bloomberg) -- ABN Amro Bank NV said it expects to see the benefits from higher interest rates in the second half of the year, joining European peers in cheering the end of negative rates.

The Dutch lender on Wednesday reported higher-than-expected profit as improvements in its loan book allowed it to release provisions for bad debt. While net interest income continued to decline, ABN Amro said it expects that trend to bottom out in the second half.

Shares of the lender rose as much as 4.6% in Amsterdam trading, the best performer among European banks, buoyed also by the outlook for a potential new repurchase program, once the government reduces its stake further.

Chief Executive Officer Robert Swaak has overhauled ABN Amro by pulling out of swathes of its investment banking business and is seeking to draw a line under a series of scandals. While costs to overhaul deficient money laundering controls continue to weigh on profit, Swaak is poised to see the benefits of his pivot to retail and commercial banking after the European Central Bank ended eight years of negative rates.

“I am pleased that now the ECB has increased its interest rate, we can stop charging our clients negative rates on their savings as from October,” Swaak said in a statement. “In these challenging circumstances, we are well placed to stand by our clients, while we continue to transform the bank towards a more client-focused and simplified organization.”

Operating income rose 8.8% from a year earlier, as ABN Amro continued to see growth in its mortgage and corporate loan books, rising fees and inflows in its wealth management business.

“We’re having to provision it all upfront,” Chief Financial Officer Lars Kramer said in a phone interview. “And basically what this means is we’re having to keep people on board for longer until middle to end of next year to get the remediation done.”

Headcount increased by 440 year-on-year, largely because of hiring for its AML unit, it said in its quarterly report. That was part of the reason why personnel expenses rose 40 million euros in the first half of the year on the same period in 2021.

The buyback announced Wednesday, of as much as 250 million euros worth of shares, is contingent upon the Dutch government selling down its stake in ABN Amro, which was bailed out in the financial crisis. It comes on top of a 500 million-euro plan outlined at the start of the year.