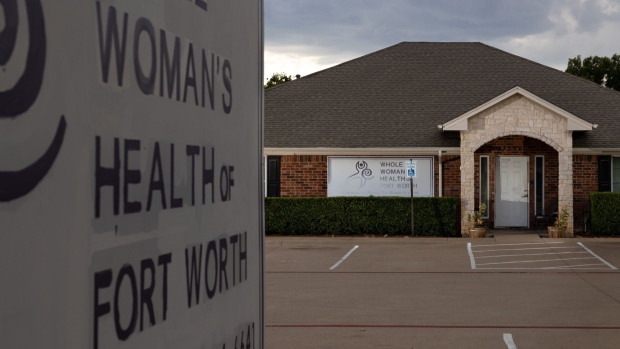 The Whole Woman's Health of Fort Worth clinic in Fort Worth, Texas, US, on Sunday, July 3, 2022. A Texas judge temporarily sided with abortion rights advocates that challenged a state law from the 1920s banning the procedure, in the wake of the US Supreme Court’s decision last week to overturn Roe v. Wade. , Bloomberg

(Bloomberg) -- The number of abortions reported to the US Centers for Disease Control fell once again in 2020, extending a decade-long downward trend, largely driven by a decrease in rates among teens.

There were 620,327 abortions reported to the CDC in 2020, a 2% decline from the year before, according to data released Wednesday. The temporary designation of abortion as a non-essential service in the early days of Covid-19, clinic closures and decreased sexual activity because of the pandemic may have played a role, the CDC said.

Abortion rates have been falling for all age groups over the last decade, but adolescents have seen the biggest decline. From 2019 to 2020, the rate of abortions among 15 to 19 year-olds fell 6.8%, per the report. In the last decade, the rate has fallen 48% for that group, and 56% for those under 15.

The CDC’s report does not include 2020 data from California, Maryland and New Hampshire, where an estimated 20% of abortions in the US take place, according to the Guttmacher Institute, a research organization that backs abortion rights.

In Guttmacher’s own nationwide survey of clinics, the organization found that the number of abortions rose 8% between 2017 and 2020. Researchers attributed the increase to a variety of factors, including some states expanding Medicaid coverage to include abortion services and an increase in donations to nonprofits that pay for abortions and related costs.

Neither surveys account for the radically altered abortion landscape since the US Supreme Court overturned Roe v. Wade in June. Since then, a dozen states have implemented near-total bans, outlawing the majority of abortions in those places.

An October report from the Society of Family Planning, an abortion and contraceptive advocacy group, said that in the months following the decision, legal abortions in the country declined 6%. An estimated 18 million women of reproductive age live in a state with severe restrictions.