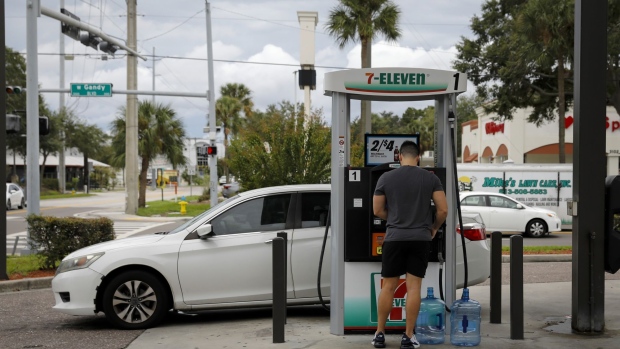 A customer fills canisters at a gas station ahead of Hurricane Ian in Tampa, Florida, US, on Tuesday, Sept. 27, 2022. Ian made landfall over western Cuba as a major Category 3 hurricane, while churning toward Florida in what could be the worst storm to hit Tampa in over a century. Photographer: Eva Marie Uzcategui/Bloomberg , Bloomberg

(Bloomberg) -- Florida gas stations that were in Ian’s path are closed while others outside the cone of destruction may face disruption as suppliers wait for the power to return and roads to clear.

All of the stations between Fort Meyers and Naples were closed, said Ned Bowman, executive director of the Florida Fuel Marketers Association, in an interview. The state has about 7,400 retail stations, he said.

Fuel bottlenecks could complicate efforts to rebuild from what is likely to amount to tens of billions of dollars in damages. Across Florida’s southwest, residents were still trapped in their homes with limited electricity and cell phone coverage. The extent of casualties was unclear.

Fuel distributors face both supply and logistical constraints as the state gets to work assessing the extent of damage.

“Power is the main issue related to infrastructure, as opposed to damage” to gas stations, said Jeff Lenard, vice president at the National Association of Convenience Stores.

Fuel racks in Jacksonville were closed, while flooded terminals in Orlando were waiting for deliveries from other parts of the state. Tampa’s fuel distribution hubs reopened Thursday morning, said Bowman.

The fuel association is working to provide generators to get gas stations downed by power outages up and running, said Bowman.

Fuel Logic is looking to bring trucks and fuel from out of state but said most of its fleet is grounded in southern Florida. “It’s probably going to be later this afternoon and tomorrow that we can really start rolling,” said Brandon Ward, a logistics manager at Fuel Logic.

The supplier had to ration diesel sales before the storm, according to Fuel Logic president Eliot Vancil. “We are definitely short,” Vancil said.

Part of the port of Tampa Bay reopened Thursday morning. The vessels Lone Star State and American Phoenix are underway to deliver fuel from Louisiana to Tampa, according to Bloomberg vessel tracking.

(Updates percentage of stations out of fuel in second paragraph.)