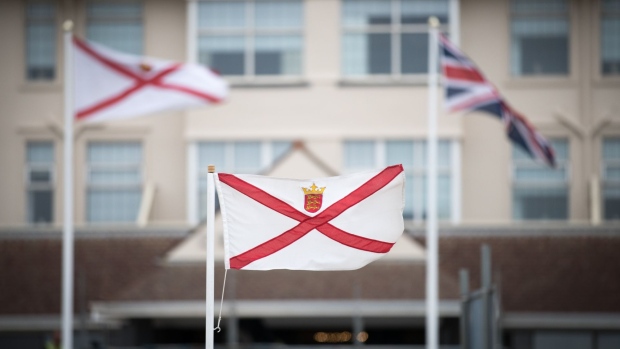 ST HELIER, JERSEY - APRIL 12: The Jersey flag flutters in the wind in St Helier on April 12, 2017 in St Helier, Jersey. Jersey, which is not a member of the European Union, is one of the top worldwide offshore financial centres, described by some as a tax haven, as it attracts deposits from customers outside of the island who seek the advantages of reduced tax burdens. In 2008 Jersey's gross national income per capita was among the highest in the world. However, its taxation laws have been widely criticised by various people and groups including the EU. As the UK negotiates its exit from the EU having triggered Article 50, concerns have been raised as to how this will affect the future of the financial industry on the island especially as The chancellor, Philip Hammond has claimed Britain could also become a corporate tax haven if the EU fails to provide it with an agreement on financial market access after Brexit. (Photo by Matt Cardy/Getty Images) , Photographer: Matt Cardy/Getty Images

(Bloomberg) -- A legal battle over police raids on the British tax haven of Jersey has helped show how authorities moved to investigate holdings linked to sanctioned billionaire Roman Abramovich in the months after Russia invaded Ukraine.

The Channel Island started an investigation last year into assets held and managed by companies tied to Abramovich. As part of the probe, its top court froze more than $7 billion of assets connected to him — around half of his publicly estimated wealth at the time.

Police on the island raided premises belonging to a “legal professional” and offices in St. Helier last year in connection with a criminal investigation into potential sanctions breaches and money laundering, according to a ruling made public Monday. The probe is focused on assets held through Jersey companies suspected to be connected to Abramovich.

Abramovich was sanctioned by the European Union and the UK last year as part of sweeping penalties against wealthy and powerful businessmen believed to be close to Russian President Vladimir Putin.

Sanctioned Russians have been looking to push back against stringent moves by authorities across Europe to restrict access to luxury yachts, mansions and bank accounts. Russian billionaire Alexey Kuzmichev scored a victory against French authorities after a court ruled that custom officers broke procedural rules when they swooped to immobilize one of his yachts moored in Cannes.

Search warrants executed by Jersey’s police against the lawyer and company in April were scrutinized in court after the people involved alleged the searches were “unlawful.” Neither of the targets of the raids can be identified after a court order.

The Jersey decision related to an application for costs over a paperwork error made in the warrant, that local police have since accepted. Judicial review proceedings brought by the people raided have been settled.

Judge William Bailhache said claims that the raids were “sloppy” and amounted to an invasion were exaggerated. He said it was only procedurally unlawful because of an operational mistake by police.

“The government is satisfied that the Attorney General and the Chief of Police have reviewed the circumstances around how the operational error with the warrants arose,” the Government of Jersey said in a statement. The investigation into the Abramovich linked assets is still active.

--With assistance from Jonathan Browning.

(Updates with Abramovich representative in the penultimate paragraph)