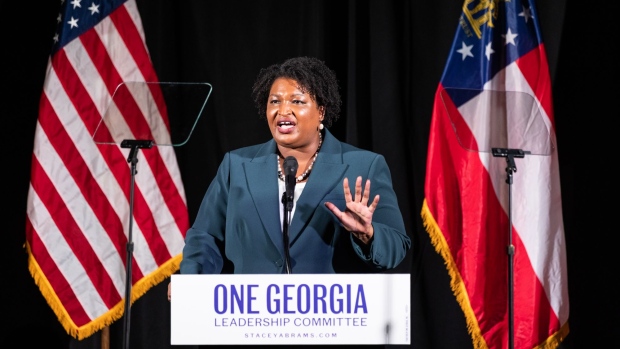 Brian Kemp, governor of Georgia, speaks during a news conference in McDonough, Georgia, US, on Friday, July 29, 2020. Georgia's Democratic US senator, Raphael Warnock, and Republican Governor Brian Kemp lead their respective challengers in a poll released Wednesday by the Atlanta Journal-Constitution newspaper. , Bloomberg

(Bloomberg) -- Georgia Democratic gubernatorial candidate Stacey Abrams unveiled a plan to deploy the largest budget surplus in state history, saying Republican Governor Brian Kemp has no vision for the windfall other than handing out checks to residents in an election year.

In a speech at an Atlanta brewery Tuesday night, Abrams said Georgia has a “once-in-a-generation” opportunity to invest in itself. The money -- $5 billion in surplus plus another $2.3 billion in federal Covid-19 relief funds -- should be invested in education, infrastructure, law enforcement, small business opportunities and rural communities, she said. Georgia also has a $4.3 billion rainy day fund.

As she did when she unsuccessfully ran against Kemp four years ago, Abrams promised to expand Medicaid under the Affordable Care Act. She pledged to push for a constitutional amendment to allow casino and sports gambling in the state, to create a permanent source of new revenue. She said no tax increases would be required.

“Hear me clearly,” Abrams said. “We don’t have to raise taxes. All we have to do is raise our expectations of those who lead us.”

The speech marked a new attack on Kemp on what has been his strongest advantage in the nation’s most-watched gubernatorial race. Kemp has emphasized the health of Georgia’s economy almost to the exclusion of any other issue, touting its 2.9% unemployment rate and new manufacturing, including a Hyundai Motor Co. plant, coming to the state.

In a statement, Kemp’s campaign press secretary, Tate Mitchell, called the speech “an hour of hot air and empty words from a desperate candidate” whose plans would cost billions. “She’s coming for your wallet to pay for it all,” Mitchell said.

Kemp has used some of the state’s budget windfall to cut checks to Georgians and plans to do it again this week.

On Thursday, the governor will announce his second $1 billion in tax rebates, along with an additional $1 billion allocation to local governments to reduce homeowners’ property taxes, according to people familiar with the plan who asked not to be identified because they weren’t authorized to speak before the announcement.

Abrams has said she supports $1 billion in tax rebates, too. She also supports Kemp’s suspension of the state gas tax, although she wants Kemp to suspend it until the end of the year: Kemp makes news monthly by extending the suspension another month.

Abrams, a former Georgia House minority leader and nationally known voting-rights advocate, narrowly lost to Kemp in 2018, when he was secretary of state. Although she has out-raised him in campaign money so far this year, she has been trailing him in most polls in the rematch. The race is ranked a toss-up by RealClear Politics.