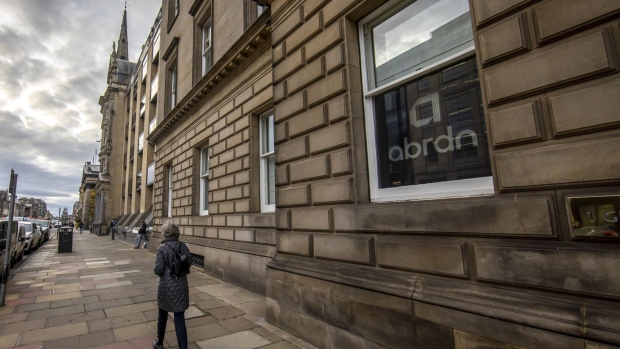 The abrdn Plc office at George Street in Edinburgh, U.K. on Thursday, Nov. 11, 2021. Abrdn is in talks to purchase investment platform Interactive Investor Ltd., according to a statement from the money manager. Photographer: Jonne Roriz/Bloomberg , Bloomberg

(Bloomberg) -- Abrdn Plc’s assets dropped in the first six months of the year after Lloyds Banking Group Plc transfered a final batch of funds out of the manager. Abrdn fell in London trading.

Abrdn lost £24.4 billion ($29.5 billion) of cash from a mandate with Lloyds that it lost in the wake of its merger in 2017, according to a statement Tuesday. Total net outflows were £35.9 billion in the period, which dragged down assets under assets and administration to £508 billion from £542 billion.

Abrdn reached a settlement with Lloyds in 2019 after one of the most high-profile disputes in the UK fund management industry’s history. Lloyds wanted to pull a £104 billion mandate from Standard Life when it merged with Aberdeen Asset Management in 2017, citing a conflict of interest with its own business. The bank, which named Schroders Plc and BlackRock Inc. as replacements, ultimately agreed to take the funds out in portions, agreeing to leave the last part until this year.

Abrdn said on Tuesday it had managed to retain £7.5 billion of the Lloyds’ mandate.

“We won £7.5 billion from Lloyds and put it into quant,” Chief Executive Officer Stephen Bird said on a call on Tuesday.  “We can draw a line under the episode of Lloyds moving away form us, but they remain a significant customer.”

Schroders, which overtook Abrdn to become the UK’s largest standalone asset manager in 2020, was one of a handful pf asset managers to reveal positive results, after reporting its assets had reached a new record of £773.4 billion in the six months through June. BlackRock Inc. saw its assets under management, which had crossed $10 trillion for the first time toward the end of last year, drop to $8.5 trillion, as of the end of June, the lowest in almost two years. Other managers including Janus Henderson Group Plc and Deutsche Bank AG’s DWS Group also saw assets decline.

Bird, who took the top job at Abrdn two years ago, has been trying to reverse years of outflows and has taken several steps to revamp the Edinburgh-based asset manager, including changing its name and buying “do it yourself” platform Interactive Investor Ltd.

Earlier this year he told Bloomberg News he has plans to shift the firm’s focus to real assets, emerging markets and smaller companies, in a bid to stand out from other active managers. He has also restructured the firm’s equities business to create a combined UK and European team.

The combination of Aberdeen Asset Management and Standard Life in 2017 was intended to build a firm big enough to compete with cheaper, passive rivals as well as the global giants. Since the tie-up, however, assets under management and administration have tumbled by more than 100 billion pounds.

(Updates with share price move in the first and sixth paragraphs, CEO comment in the fifth paragraph)