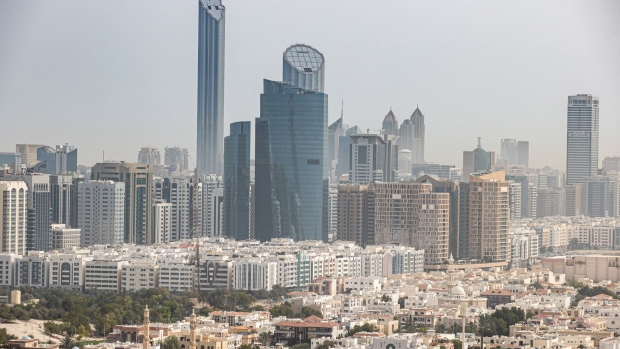 Residential and commercial skyscrapers on the skyline of Abu Dhabi, United Arab Emirates, on Sunday, April 10, 2022. Abu Dhabi regulators approved a framework for special purpose acquisition companies, looking to capture some of the blank-check boom that has gripped global markets for the past two years. Photographer: Christopher Pike/Bloomberg , Bloomberg

Abu Dhabi’s economy accelerated by more than 11% on an annual basis during the first half of the year, helped by a marked increase in oil prices.

The city, part of the United Arab Emirates’ federation, saw its gross domestic product rise to 543 billion dirhams ($147.8 billion) in the first six months of 2022, according to government figures published Thursday.

Mainly dependent on oil for most of their revenues, Arab Gulf nations, including the UAE, have been leading diversification plans to push their economies away from crude.

This has “contributed to the economy’s resilience and ability to address global changes posed by geopolitical and economic factors that directly affected strategic sectors such as energy and international trade,” Mohamed Ali Al Shorafa, chairman of the Abu Dhabi Department of Economic Development, said in the press statement.

The International Monetary Fund estimates the UAE’s economy will grow just over 5% this year before accelerating at a slower pace at 4.2% in 2023.