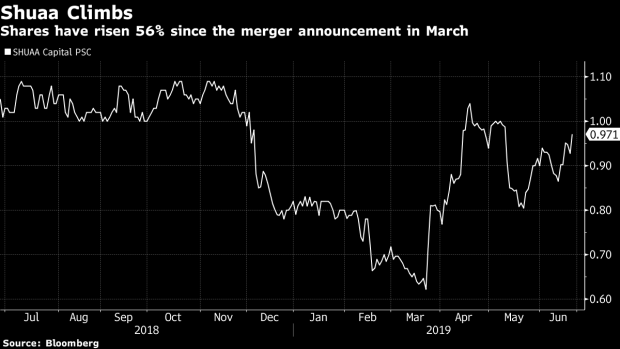 The deal values the Abu Dhabi firm’s equity at 1.5 billion dirhams ($408 million) to 1.6 billion dirhams, ADFG Chief Executive Officer Jassim Alseddiqi said in an interview on Wednesday. It also gives the combined entity a valuation of 2.8 billion dirhams and values Shuaa at 1.12 dirhams a share, a 21% premium to Tuesday’s closing price.

“If you look at the U.A.E. markets today, it is all about consolidation,” said Alseddiqi, who will become the new entity’s CEO. “Now we will be have a public currency that we can use for further acquisitions opportunistically.”

The Middle East’s financial-services industry is witnessing a wave of consolidation as banks seek ways to improve competitiveness and boost capital amid slowing economic growth. Some of the biggest lenders in the United Arab Emirates, Saudi Arabia and Kuwait are in the process of combining their operations.

Shuaa’s shares jumped as much as 6.7% in Dubai. They have risen 20% this year compared with a 4% gain for main benchmark Dubai index.

Shuaa will issue 1.47 billion new shares to Abu Dhabi Financial Group’s parent company Abu Dhabi Capital Management in return for the entire issued share capital of ADFG, according to a statement. Shuaa’s agreed valuation is based on the issuance price of 1 dirhams per share, and the undisturbed share price of 0.622 fils per share on March 21.

The new entity, rebranded as ADFG, will remain listed on the Dubai Financial Market and 58% owned by Abu Dhabi Capital Management. The new share issuance is expected to be completed in October.

The firm, with a presence across the Middle East and the U.K., hopes to win more investment banking mandates and will focus on areas such as corporate restructurings, Alseddiqi said. It also plans to expand in private equity and fixed-income by offering private debt placements and debt funds, he said.

To contact the editors responsible for this story: Stefania Bianchi at sbianchi10@bloomberg.net, Shaji Mathew