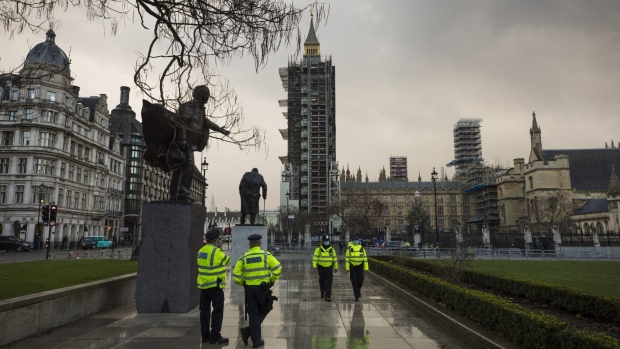 Police officers stand outside the Houses of Parliament in London, U.K., on Monday, Dec. 14, 2020. London Mayor Sadiq Khan called for schools in the capital to close to stem a rising tide of coronavirus infections that threatens to push the city into the governments tightest pandemic rules. Photographer: Jason Alden/Bloomberg , Bloomberg

(Bloomberg) -- There is a “striking prevalence” of domestic abuse among individuals referred to a government program that aims to prevent terrorist attacks, U.K. police said.

A new analysis of referrals to the counter-radicalization “Prevent” program in 2019 found that out of 3,045 people, just over a third, or 1,076, had a link to a domestic abuse incident -- either as an offender, victim, witness or a combination of all three.

National Co-ordinator for Prevent, Detective Chief Superintendent Vicky Washington said in a statement that the findings “indicated a clear over-representation of domestic abuse experiences in the lives of those who are referred to us for safeguarding and support.”

Where a link to a domestic abuse-related incident was identified, an Islamist ideology was recorded in 28% of referrals, while extreme right-wing ideologies accounted for 18%. The U.K. is reviewing currently reviewing the Prevent program.

The suspect in the deadly stabbing of Conservative MP David Amess last month had reportedly been referred to Prevent several years ago -- as had at least two others in the past few years who went on to commit violent or deadly acts.