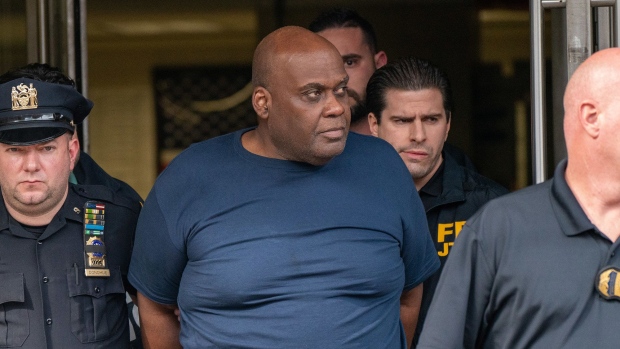 Frank James is escorted out of the 9th Precinct by police after being arrested in New York on April 13, 2022. , Photographer: David Dee Delgado/Getty Images

James appeared in federal court in Brooklyn on Friday, a month after he was arrested. Wearing khaki jail fatigues, a blue surgical mask under his nose and black sneakers, he spoke confidently as he twice pleaded “Not Guilty” before U.S. District Judge William Kuntz.

James, 62, has been held in federal custody since his April 13 arrest following a 30-hour manhunt. He is accused of firing a Glock handgun at least 33 times inside a crowded Brooklyn subway car on April 12. There were no fatalities, but 10 people were shot and 13 received other injuries in the ensuing panic.

Surveillance cameras caught James entering the subway system in Brooklyn that morning, dressed as a maintenance worker. After boarding a Manhattan-bound N train in Brooklyn’s Sunset Park, witnesses said he donned a gas mask and tossed two smoke cannisters into the subway car before opening fire.

After the attack, police said he escaped onto another train. He was finally arrested in Manhattan’s East Village after someone called a police tip line. His defense lawyers have said James placed the call.

Kuntz began the half-hour hearing on Friday by asking James how he was doing.

The judge then asked James a series of questions, including whether he understood why he was in court, where he was born and his education.

James had been initially charged with one count of committing a terrorist act on a mass transit system. On May 6, a federal grand jury added an additional charge, accusing James of discharging a firearm during a violent crime.

If convicted of the terrorism count, James faces a term as long as life in prison, said Breon Peace, the U.S. Attorney for New York’s Eastern District in Brooklyn. The gun charge carries a mandatory minimum of 10 years in prison and a possible life sentence, said John Marzulli, a spokesman for Peace.

In a 10-page criminal complaint, federal prosecutors detailed a litany of evidence linking James to the attack. Authorities found two bags that the gunman left behind on the train. One held a Glock semiautomatic, a plastic container of gasoline, a torch, a key to a U-Haul vehicle and multiple bank cards, the US said. The other had fireworks filled with black-powder explosives.

One of the bank cards belonged to James, authorities said, and records show the U-Haul van was rented by “Frank Robert James.” New York police officials also found video surveillance showing the van entering Brooklyn the morning of the attack. It was later found two blocks away from an N train subway station.

Federal prosecutors argued Frank should be held without bail until trial, saying authorities also found a “stockpile” of weapons in his storage unit. In a YouTube post before the attack, James had complained about the number of homeless people on the city’s subway system. “I should have gotten a gun, and just started shooting,” he said.

(Updates with detail from hearing and background on case.)