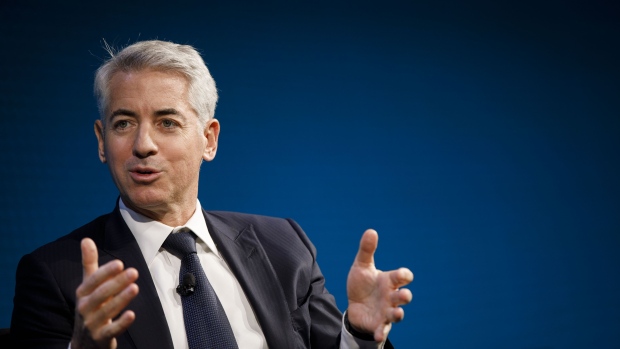 Bill Ackman’s blank check company is seeking to raise as much as US$6.45 billion through an initial public offering combined with a commitment from the billionaire’s hedge fund.

The special purpose acquisition company, or SPAC, plans to raise US$3 billion from outside investors and US$1 billion to US$3 billion from funds associated with with Ackman’s hedge fund, Pershing Square Capital Management. If the IPO over-allotment option -- the so-called greenshoe shares -- is exercised by the banks, it would bring the total to US$6.45 billion.

Ackman, in an interview Monday during the Bloomberg Invest Global virtual conference, said he believed the economy would begin to recover by the end of the year but won’t return to anything close to normal until the second half of 2021. If there’s an early, distributable coronavirus vaccine in the fall, that would make an enormous difference, he said

“We’ve had kind of sloppy closure of the country for the virus, and we’re having a bit of a sloppy opening,” he said. “You’re not going to have business confidence return and consumer confidence return until people feel truly safe.”

Listings by SPACS helped buoy markets through a slump induced by the coronavirus pandemic earlier this year, especially in the U.S.

Of the 101 companies raising US$34 billion in IPOs on U.S. exchanges this year, 32 of them accounting for almost a third of the total were SPACs, according to data compiled by Bloomberg. The US$1.1 billion listing, including greenshoe shares, in February by Michael Klein’s Churchill Capital Corp. III was the largest of those.

At US$3 billion, Pershing Square’s Tontine listing would be the largest SPAC IPO on record, according to data compiled by Bloomberg.

SPACs raise money on the public markets to make an acquisition within a set period of time. A target isn’t identified until after the shares start trading.

Tontine plans to sell 150 million units for US$20 each, according to its filing. Each unit will consist of one share of Class A stock plus warrants.

It’s been eight years since Ackman last participated in a blank check company.

Pershing Square was a sponsor on a similar company known as Justice Holdings Ltd., which raised US$1.44 billion in its 2011 offering. It merged with Burger King Worldwide Inc. in 2012 and brought the fast-food chain back to the public market.

That company eventually became Restaurant Brands International Inc., in which Pershing Square still owns a 13.4 per cent stake, according to data compiled by Bloomberg.

The Tontine offering is being led by Citigroup Inc., Jefferies Financial Group Inc. and UBS Group AG. Tontine plans for its shares to trade on the New York Stock Exchange under the symbol PSTH.WS.