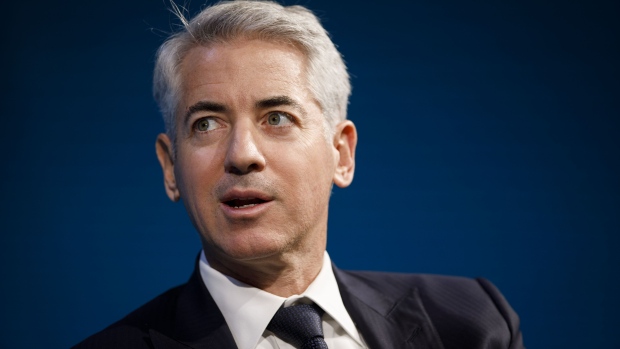 Activist investor Bill Ackman was so concerned about the potential impact of the coronavirus that he considered liquidating his hedge fund’s entire portfolio for the first time.

Instead, the billionaire opted for another strategy: A lucrative credit hedge that earned his firm about US$2.6 billion in profits when the market plummeted.

Ackman said in a letter to investors in the fund, Pershing Square Capital Management, Monday that he used the proceeds from the credit bet to substantially boost investments in several portfolio companies. That included increasing his stake in Warren Buffett’s Berkshire Hathaway Inc. by 39 per cent, and reinvesting in Starbucks Corp. in a new position valued at roughly US$730 million.

“We were sufficiently concerned about the health and economic implications of the coronavirus that we considered, for the first time ever, liquidating the portfolio in its entirety because we believed it was likely that markets would decline materially,” Ackman said in the letter. “After a careful review of the portfolio, we concluded that a hedging strategy was more consistent with our long-term ownership philosophy, and would likely lead to a better long-term outcome than selling off all of our assets.”

Pershing Square used the proceeds to increase its holdings in Howard Hughes Corp., the real estate company that Ackman chairs, by 158 per cent through a previously announced secondary offering. Ackman said his new Starbucks investment amounted to about 10 per cent of Pershing Square’s US$7.3 billion in assets under management after exiting his previous investment in the coffee chain this year.

The activist investor boosted his stakes in Lowe’s Cos. by 46 per cent and in Hilton Worldwide Holdings Inc. by 34 per cent. Pershing Square also increased its holdings in Burger King owner Restaurant Brands International Inc. by 26 per cent and medical device maker Agilent Technologies Inc. by 16 per cent. The firm also raised its cash position to 18 per cent from 14 per cent.

To protect the portfolio against the impact of the virus, Pershing Square paid about US$27 million for hedges in the form of purchases of credit protection on investment-grade and high-yield credit indices, Ackman said in a letter last month. The hedges generated US$2.6 billion in proceeds by the time he exited them on March 23.

At their peak, Ackman said Monday, the hedges amounted to about 40 per cent of the firm’s total capital.

As a result, Pershing Square returned 11 per cent on its investments in March amid the broader sell-off, bringing its year-to-date returns to 3.3 per cent through March 31, according to its website.

“We of course do not know whether the recent lows that have been achieved will be breached by further market declines,” Ackman said. “Our decision to unwind our hedges was driven by the less favorable risk-reward ratio offered by our credit hedges as spreads widened, and the much more favorable risk-reward ratio presented by the then-trading values of companies in which we bought shares.”

He said he believed Pershing Square was well positioned to weather the impact of the coronavirus pandemic now that the hedges have been unwound.

“We are fortunate to own businesses that are designed to withstand the test of time,” he said. “Importantly, our portfolio companies are generally considered essential businesses, and for the most part will remain open to the extent possible during a state and/or a national shutdown. All of our portfolio companies, however, will be affected to varying degrees in the short term by the virus’ impact on the global economy.”

Last month Ackman called for a 30-day shutdown across the U.S. to help slow the spread of COVID-19, the disease caused by the new coronavirus. In a March 18 interview, he said “hell is coming” if drastic steps weren’t taken to prevent its spread.

A week later, he said in a interview with Bloomberg TV he had made a US$2.5 billion “recovery bet” on a bounce back, after gaining confidence that President Donald Trump’s response to the outbreak was “heading in the right direction.”

On Sunday, Ackman took to Twitter to convey his thoughts on the virus in a series of posts.

“While it is hard to be positive when we know that tens of thousands more will die and many more will get severely sick, I have no choice but to be more optimistic about the intermediate future based on the data and facts I have seen recently. I hope I am right,” he wrote.