While Bill Ackman has suffered losses as a Wall Street stock picker, he’s thrived as a Philadelphia landlord.

The hedge fund manager personally holds a majority stake in Rittenhouse Hill, a luxury apartment complex that’s one of the largest in Philadelphia, according to a May regulatory filing that first disclosed his ownership. The property, with about 625 units, has jumped in appraised value since he teamed up with the Pestronk brothers to buy it in 2011.

Now he’s employing Rittenhouse Hill as part of an effort to revive his $8.1 billion activist hedge fund after three years of losses. Ackman plans to use his personal assets to raise several hundred million dollars to buy shares of Pershing Square Holdings Ltd., the publicly traded version of his New York-based hedge fund, according to a letter to investors. His goal is to narrow the 22 per cent gap between the market price and net asset value of the fund’s shares.

“Ackman making open-market purchases is a very smart thing because they shouldn’t trade with such a discount,” said David Tawil, co-founder of Maglan Capital, a hedge fund that specializes in event-driven strategies. “I would certainly go ahead and make a bet on myself in this instance.”

Some Pershing Square Holdings investors have been trapped by the steep discount. The vehicle, which raised about US$5 billion through private stock sales and a 2014 public offering, was supposed to free clients from lockups that can last two years at Ackman’s hedge fund.

But the discount in the share price began to widen in March 2016 with the collapse of Valeant Pharmaceuticals International Inc., then a major Pershing Square holding. Hedge fund losses that year and in 2017 kept downward pressure on the shares, making it increasingly expensive for investors to exit. 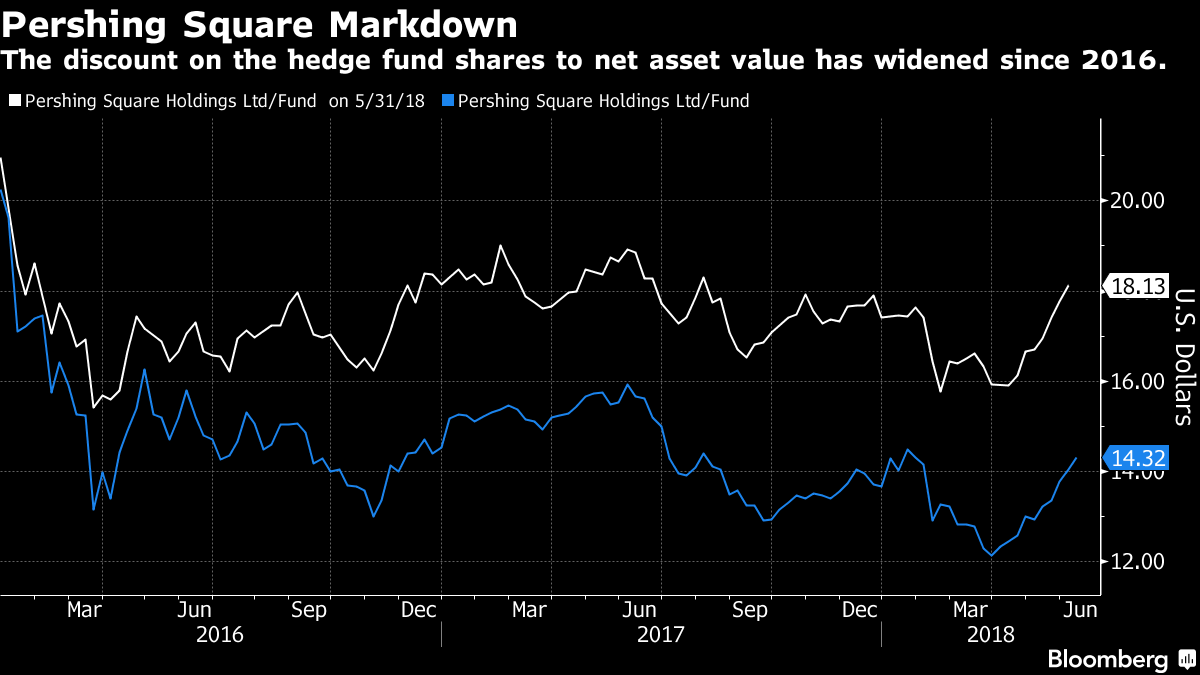 “It’s like captive money, really,” said Phillip Goldstein, co-founder of activist firm Bulldog Investors, which specializes in closed-end funds like Ackman’s. “A lot of people clearly want out but at a price closer to NAV,” or net asset value. Goldstein owns about 5,000 Pershing Square Holdings shares.

Pershing Square Holdings tried its own buyback strategy earlier this year -- to little avail. The firm repurchased some $300 million of shares through a Dutch auction at a 20.5 per cent discount. The markdown to net asset value has persisted after the auction -- a result of too many sellers and not enough buyers.

The shares trade at a bigger-than-normal discount -- U.S. closed-end funds currently sport an average 5.5 percent discount, according to Ryan Paylor, a portfolio manager at Thomas J. Herzfeld Advisors. The fund’s unusual voting structure, with 50.1 per cent of the shares controlled by a trust, has discouraged activists such as Boaz Weinstein, who specialize in gaining control and cashing out closed-end funds that trade at a discount, he added.

“Normally, a fund like this would already have been liquidated,” Paylor said. “But the way the fund is structured, no real activism can occur.”

Ackman is digging into his own deep pockets for the next buyback with a bit more wind in his sails: the hedge fund has rebounded for a gain this year. He has a fully staffed family office called Table Management that invests on his behalf, primarily in real estate, venture capital and private equity. His prior real estate deals include the US$91.5 million purchase with other buyers of a penthouse at the Manhattan luxury tower One57.

He told investors in the May 17 letter that he would use personal cash, proceeds from borrowings and “liquidity from the sale or financing of other non-Pershing assets that I own.”

About US$200 million of the total will come from performance fees that Ackman had socked away offshore, a step that many hedge fund managers took to avoid taxes on the gains. Congress closed that loophole about a decade ago, but gave managers until last year to repatriate the fees and pay taxes on them.

He’s also drawing on Rittenhouse Hill, the apartment complex that’s been a win for him.

Regulatory filings show that he recently took out US$9 million of equity through a refinancing of the Philadelphia property that he and the Pestronks originally purchased through a US$27 million short sale. They then spent US$59 million, primarily financed through borrowings, to gut the twin high rises and transform them into luxury apartments. The building’s most recent appraised value: US$178 million.

“It’s one of the nicest class A apartment buildings in Philadelphia,” said Ken Wellar, a managing partner at Rittenhouse Realty Advisors, a local firm that focuses on multifamily investment sales.