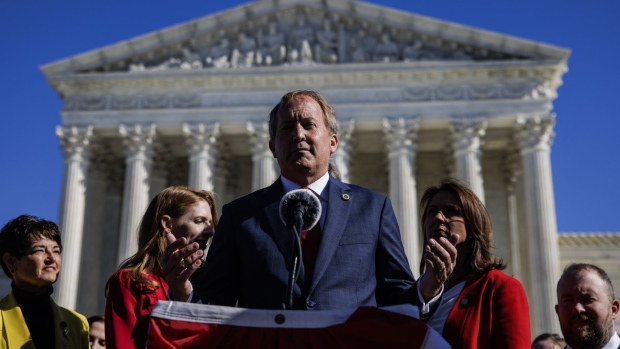 Ken Paxton, Texas attorney general, speaks outside of the U.S. Supreme Court in Washington, D.C., U.S., on Monday, Nov. 1, 2021. The Texas abortion clash goes before the court today, with providers and the Biden administration trying to cut through a procedural haze to block a law that has largely shut down the practice in the country's second-largest state. , Bloomberg

(Bloomberg) -- The American Civil Liberties Union sued Texas Attorney General Ken Paxton and other officials to block enforcement of a looming ban on most abortions in the state following the US Supreme Court’s overturning of Roe v. Wade last week.

Filed Monday in state court in Dallas, the ACLU suit argues that the state trigger law, which was designed to go into effect with the end of Roe v Wade, is “antiquated” and inconsistent with due process guarantees in the Texas constitution. The civil rights group said it will argue at a hearing tomorrow for a temporary restraining order or preliminary injunction to block the law while the suit proceeds.

Since the Supreme Court ruled on Friday that there is no right to an abortion at the federal level, the ACLU, Planned Parenthood and other groups have filed a slew of suits seeking to uphold those rights under state constitutions. Actions have also been brought in Idaho, Kentucky, Utah and Ohio.

“With the blessing of five Supreme Court justices, politicians will soon be able to force Texans to suffer the serious risks, pains, and costs of pregnancy and childbirth against their will,” Julia Kaye, an ACLU attorney, said in the statement. “But that day is not today, despite Attorney General Paxton’s campaign to stop all abortions immediately by threatening unlawful prosecutions under antiquated laws.”