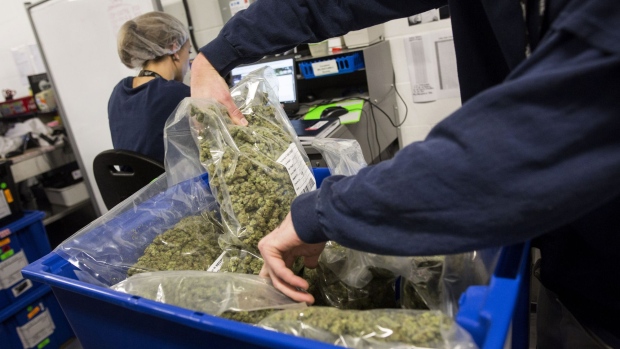 An employee sorts bags of marijuana for shipment at the Canopy Growth Corp. facility in Smith Falls, Ontario, Canada, on Tuesday, Dec. 19, 2017. Canadian medical marijuana is setting the stage to go global. The country's emerging legal producers have a chance to seize opportunities in other countries that could make them worldwide leaders, according to Canopy Growth Corp. Chief Executive Officer Bruce Linton. , Bloomberg

Acreage Holdings Inc. has some “head-turner” acquisitions in the works now that its planned sale to pot giant Canopy Growth Corp. has been sealed, according to the New York-based company’s chief executive officer.

“There are going to be some really exciting ones, I think some head-turners, some people are going to be like, ‘Ooh, wow, that’s amazing,”’ Kevin Murphy said in an interview in San Francisco ahead of a panel discussion at the Players Technology Summit presented by Bloomberg.

The deals could change its scale “quite dramatically over the next month,” Murphy said.

The unusual plan of arrangement between Canopy and Acreage, which closed Thursday, is contingent on cannabis becoming federally permissible in the U.S. For now, Acreage shareholders will receive US$2.63 in cash and the company will have access to Canopy’s intellectual property and brands. If the deal closes, investors will receive 0.5818 of a Canopy share for each Acreage share they hold.

The deal is currently worth US$26.32 per Acreage share or about US$3.1 billion. That’s about US$10 above Acreage’s current stock price.

Acreage can also issue as many as 63 million shares to do acquisitions, with the targets knowing they’ll eventually end up with Canopy stock if the U.S. changes its federal laws. Acreage filed a base shelf prospectus Monday to offer as much as $800 million in shares, debt or other securities over the next 25 months.

Murphy said he doesn’t plan to dip into the capital short-term. “Frankly we have no determination as to when we’ll raise any additional capital because today we’re not in need of it,” he said.

Acreage also plans to begin selling Canopy’s brands in its 26 U.S. stores soon, “with a more definitive rollout” planned over the next month, said Murphy, who was wearing a T-shirt with Canopy’s Tweed brand logo on it.

Illinois, which became the 11th state to legalize recreational cannabis earlier this week, is one area of focus for Acreage.

“We have designs on going very deep and very broad in that state,” he said.