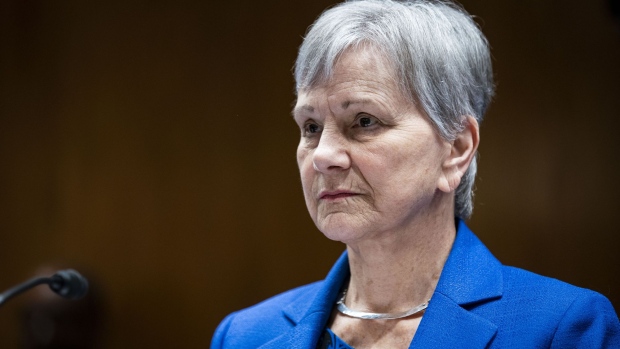 (Bloomberg) -- President Joe Biden’s administration has ruled out nominating Janet Woodcock as permanent head of the Food and Drug Administration, people familiar with the matter say, as the search continues for a leader during a crucial period for full approval of coronavirus vaccines.

Woodcock, who has served as acting commissioner since Biden took office, has faced firm opposition on Capitol Hill for the job from lawmakers including Democratic Senator Joe Manchin, a key swing vote in the evenly divided chamber who criticized the agency over the controversial accelerated approval this year of an Alzheimer’s drug.

The White House hasn’t publicly ruled out Woodcock, but officials have privately concluded that she won’t be the nominee, said the people, who discussed the matter on condition of anonymity.

Woodcock is eligible to serve as acting commissioner until November 15th, unless Biden nominates someone else before then, in which case she can remain in charge of the agency while the nomination proceeds, according to an official familiar with the matter. Woodcock, 72, has been at the FDA for 35 years.

The process has dragged on at a time when the FDA is presiding over several aspects of the pandemic response, including review of drugmaker applications, inspection of batches of doses and decision-making over approval of vaccines that have so far been distributed only under emergency authorization.

White House spokesman Chris Meagher declined to comment specifically on Woodcock’s future, but said: “We have strong acting leadership in place that is playing an important role in our Covid-19 response and beyond, and look forward to sharing a nominee with the requisite expertise and leadership for this job.”

As Biden weighs his options, the FDA faces a lengthy and pressing series of choices that will steer the Covid-19 pandemic.

Biden’s administration this week announced that it would begin offering Covid-19 booster shots on September 20, an announcement that was signed by Woodcock but which the administration claims is subject to FDA approval. They’re also deferring to the FDA on whether to extend boosters to minors.

The FDA will be tasked with reviewing safety data for vaccination of children under 12, as well as potential applications by makers of other vaccines, such as AstraZeneca Plc., for U.S. clearance.

Biden has also publicly expressed hope that the FDA will soon approve the Moderna Inc. and Pfizer Inc. vaccines, which have been used widely domestically. He is urging approval because he believes it will ease vaccine hesitancy in the U.S. and also give businesses firmer moral and legal footing to require vaccinations of staff, officials familiar with the matter said. Governors and academics have also put pressure on the FDA to issue a full approval.

Woodcock’s prospects for the job took a hit this year with the controversy over approval of Biogen Inc.’s Aduhelm, an Alzheimer’s drug, one of the people said. The company and the FDA have faced mounting criticism since the approval in June.

In a June letter to Biden, Manchin cited that as the latest in a series of his complaints about Woodcock’s tenure. He called for Biden to swifly name a replacement. “Without a permanent, confirmed commissioner in place to lead the FDA, important decisions that impact the country’s response to Covid-19 will be slowed and prevent additional work to combat the ongoing drug overdose epidemic,” Manchin wrote.

Biden isn’t expected to announce a nominee in the immediate future, the people said.