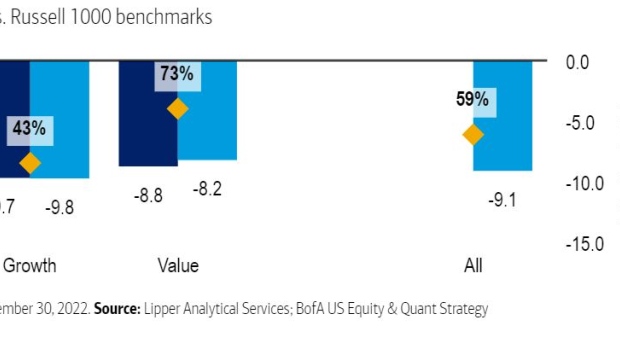 (Bloomberg) -- In an environment in which inflation remains entrenched and central banks continue to tighten, one strategy has done relatively well: active investing.

Data from Bank of America show 59% of large-cap active funds outperformed their Russell 1000 benchmarks amid a brutal market rout in September. In particular, value funds had a strong month with 73% outperforming the Russell 1000 Value Index, with a 90th-percentile month and the best hit rate since June 2020, strategists led by Savita Subramanian wrote in a recent note.

Active managers have a habit of doing better when markets are falling. It’s unclear why: a widening dispersion of returns is often cited, though it’s debatable if that was the case last month. Several years ago, researchers showed that when indexes are rising, their gains tend to be concentrated in just a few superstar stocks -- ones most active managers fail to own. It may be true that when they’re falling, the same dynamic plays out in reverse and funds tend not be get saddled with the biggest losers.

Zhiwei Ren, portfolio manager at Penn Mutual Asset Management, says active funds did well in September when US stocks saw their worst monthly rout since March 2020 because many tend to be bearish.

“The first half of the third quarter was a big rally, the market rallied, and I think the mutual funds were underperforming because they were holding elevated cash positions,” Ren said in an interview. “September gave them some relief but probably not enough for most of them to outperform their indexes.”

Indeed, their September performance wasn’t enough to bring the quarter positive returns. Active funds in the third quarter underperformed, with just 39% beating their benchmarks, data from Bank of America show. Value funds fared better with a 55% hit rate year-to-date, trailed by core at 38% and growth at 31%.

“It was a tough environment for active funds, with above-average pair-wise correlations (i.e. macro-driven market) and scarce alpha opportunities,” the bank’s strategists said.

It was especially tough for small- and mid-cap funds, which further underperformed compared to their large-cap peers. For the quarter, only 20% of small-cap funds outperformed their Russell 2000 benchmarks.