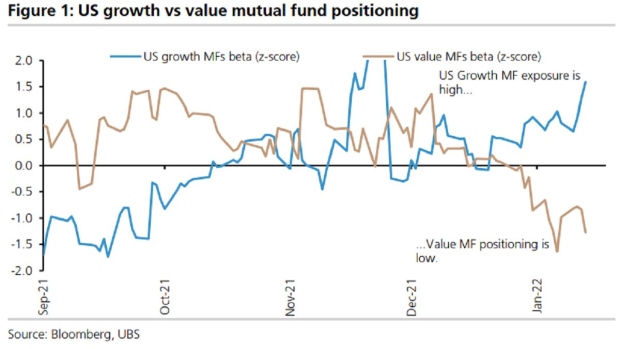 Long underweight the booming tech megacaps in recent years, professional speculators failed to ride the January revival in value shares, as they struggled to cut fast enough exposures to growth firms that have been killed in the bond selloff.

This January has marked a big upheaval in equities generally, with indexes like the Nasdaq 100 heading for the worst month since the global financial crisis. Within the tempest has been a clear delineation between winners and losers. High-flying online firms have been crushed, while Old Economy names held up.

In turn, hedge funds have proved a major casualty in the violent market rotation in favor of cheap-looking firms.

Long-short funds were down in 4% in the first two weeks of the year, almost double the S&P 500’s decline, according to data compiled by Goldman Sachs Group Inc.’s prime brokerage. Separate data from Morgan Stanley showed a similar story as hedge funds tracked by the firm lost 4.3% this year through Tuesday. Long-only mutual funds have also lagged their benchmarks.

“Investors really got creamed,” said Chris Grisanti, chief equity strategist at MAI Capital Management. “They stayed too long with tech that was overvalued and they paid the price.”

It’s all happening because the economy is rebounding from the pandemic recession and tech firms are no longer the only game in town. Moreover, higher yields put pressure on richly valued stocks, many of which need a long time to produce the profits implied by their share prices.

Based on Russell 1000 indexes, cheap-looking stocks have outrun their growth counterparts by more than 8 percentage points in January, poised for their best month since February 2001. That’s an about-face from the recent past, when value had lagged in all but two years since the 2008 global financial crisis.

The quick reversal in fortune is particularly brutal for hedge funds, which had piled into high-growth, high-valuation stocks, pushing their exposure to at least a two-decade high late last year. A furious unwinding has since taken place and continued into the new year. In the first two weeks of 2022, hedge funds cut leverage at the fastest pace since April 2020, client data compiled by Goldman show.

Still, the unwinding wasn’t fast enough to avoid the latest blow. The industry’s most-crowded stocks, as followed by Morgan Stanley, have fallen in all but one days this year, dropping 17% over the stretch. The Goldman Sachs Hedge Industry VIP ETF (ticker GVIP), tracking hedge funds’ favorite stocks, is down 12% in January, on course for its worst month since the March 2020 pandemic-spurred bear market.

They’re not the only ones struggling in the market upheaval. UBS Group AG strategists led by Keith Parker plotted mutual funds’ beta, or relative volatility to their benchmarks, to gauge their tilt to various investing styles.

Going by their model, funds that focus on companies with faster sales or profit expansions appeared to lean further into this style of growth investing, with their beta sitting at 1.6 standard deviation above the historic average. That kind of exposure, according to UBS, is likely why 65% of the funds have trailed their benchmarks this year.

Even value funds themselves have lagged their value benchmarks, either because they held too much cash or because they brought underperformers.

The trouble is not limited to U.S. stock pickers. Barclays Plc strategists including Emmanuel Cau observed that active funds in Europe are facing a similar challenge.

“Value has caught up with bond yields, yet mutual funds still hold a prominent growth tilt,” Cau wrote in a note last week. “Investors do not seem to have materially adjusted their portfolios in anticipation of a sustained regime change of more value outperformance.”

To Parker at UBS, all the underperformance creates pressure on money managers to adjust positions, potentially adding further fuel to the rotation. “The relative positioning would support a further move in favor of value,” he wrote in a note to clients Tuesday.