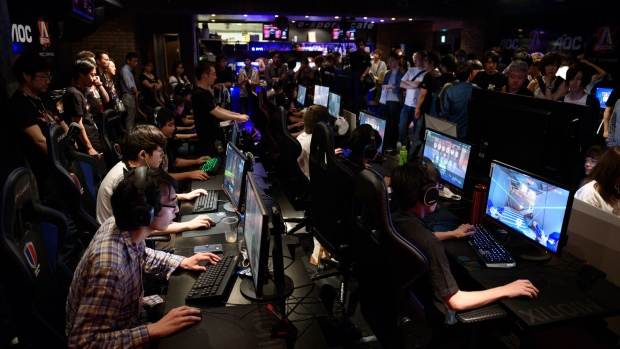 Attendees play Activision Blizzard Inc.'s Overwatch computer game at the AOC Open e-Sports event in Tokyo, Japan, on Saturday, July 1, 2017. Players in Japan, which held some of the world's first televised video-game battles in the 1980s, no longer has serious training grounds for its players. Laws meant to police organized crime and gambling have cast a net so wide they prevent paid gaming competitions. , Bloomberg

(Bloomberg) -- In dealing with similar controversies this week, the NBA and Activision Blizzard Inc. have taken different paths.

Both of them got caught in a sticky situation in recent days, trapped between supporters of Hong Kong’s pro-democracy protesters and the threat of condemnation by China. And neither of them seemed to relish the ensuing media firestorm.

But the basketball league mostly dealt with its controversy out in the open. Coaches, players and executives were peppered with questions on the issue, and even though some shied away from addressing it, they couldn’t avoid the spotlight.

Activision’s Blizzard Entertainment division, meanwhile, has tried to weather its China storm by being as quiet as possible. After it banned a tournament player for supporting the Hong Kong demonstrations -- and stripped him of some $10,000 in prize money -- the company has said little more about the incident.

But with a customer backlash and a boycott campaign brewing, there may not be an easy way out.

“The company now faces significant criticism within the U.S. over their actions,” Cowen & Co. analyst Doug Creutz said in a note this week. “We do think this represents a new risk,” he said, “though at present one that is very hard to evaluate.”

It all started when Chung Ng Wai, a gamer who goes by the name Blitzchung, wore a gas mask and chanted a pro-Hong Kong slogan in an interview after a tournament. Blitzchung plays Hearthstone, an online card game from Blizzard.

China considers support for the demonstrators an affront to the nation and its people, and Blizzard treated it as a grave offense. The company banned Blitzchung from Hearthstone events for a year and said he’d receive no prize money.

Blizzard said he violated its rules against an act that “brings you into public disrepute, offends a portion or group of the public, or otherwise damages Blizzard image.”

An uproar ensued. U.S. lawmakers on both sides of the political aisle denounced the company for kowtowing to China. A sportscaster said he won’t work with Blizzard anymore, and several employees staged a protest at its offices in Orange County, California. They covered up a plaque that read “Every Voice Matters” and held up umbrellas -- a symbol of the Hong Kong protesters.

Fans called for a boycott of Blizzard and many are now saying on social media that they are having trouble canceling their subscriptions to the company’s games, which include the hit Overwatch. Among the complaints: Fans are saying they have to show government identification to cancel and that other roadblocks have been put in place.

Customers looking to cancel are warned by the company that their player records will be lost, as well as any games purchased and account balances.

Some of the cancellation complaints may be overblown. The video-game site Polygon said the roadblocks probably stem from Blizzard’s servers being overloaded, not a deliberate attempt to keep users from deleting their accounts.

Video-game companies have had to grapple more with free-speech issues in recent years, now that esports -- gaming competitions that are broadcast to millions of fans -- are such a big part of the industry. The maker of League of Legends, a division of Tencent Holdings, said this week that it won’t let broadcasters discuss “sensitive” topics, including political or religious issues.

For Activision Blizzard, a boycott comes at a particularly difficult time. The Santa Monica, California-based company has struggled to come up with fresh hits, and executive turnover is high. The heads of Activision Blizzard’s three major divisions have been replaced over the past year, as was its chief financial officer, who quit.

And the company is counting on customers embracing a mobile version of its hit shooting game Call of Duty, done in partnership with Tencent, which has also invested in Activision Blizzard.

The company also is preparing for Blizzcon, its big fan convention held in Anaheim, California, in early November. Attendees have threatened to come dressed as Winnie the Pooh, which has become a symbol of resistance against the Chinese government.

“We suspect that the decision to punish Blitzchung, which almost certainly had input from senior Activision management, was met with dismay by a meaningful portion of Blizzard’s staff,” Creutz said. “Investors are counting on a turnaround at Blizzard to reinvigorate growth, but if the internal culture is in turmoil, there is a lot of risk to that thesis.”

The punishment meted out to Blitzchung stands in stark contrast to how the NBA handled its problem. In that case, the Houston Rockets General Manager Daryl Morey tweeted his support for the Hong Kong protests, right before the league was due to play a couple of preseason games in China. But the league didn’t punish Morey and has instead endured a backlash from Chinese authorities and sponsors there.

Activision’s reaction also contrasts with that of Epic Games founder Tim Sweeney, the creator of Fortnite. Sweeney, whose company also has Tencent as a significant shareholder, said on Twitter this week that he supports free speech.

“Epic supports the rights of Fortnite players and creators to speak about politics and human rights,” he said.