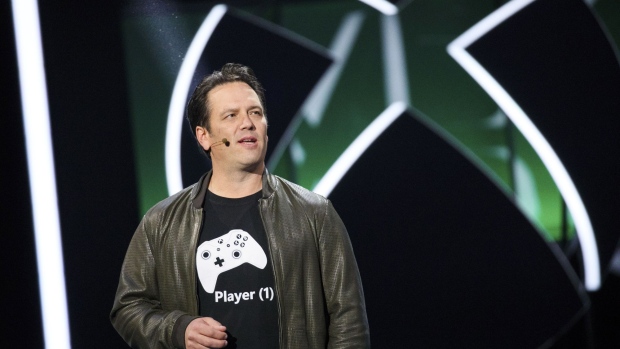 (Bloomberg) -- Late last year, as Activision Blizzard Inc. and Chief Executive Officer Bobby Kotick were reeling from accusations that Kotick knew of sexual harassment at the company for years, a group of Microsoft Corp. senior executives suggested that Xbox head Phil Spencer, a longtime video-game industry statesman, check in with the embattled CEO.The goal, according to a person familiar with the matter, was to offer support to a key partner and make it clear that Microsoft had concerns about the treatment of women at Activision. Another aim: to ensure that if Kotick and the board were willing to sell the company, Microsoft would be well positioned to make an offer. After a few phone calls over a two-week period, discussions evolved to Microsoft’s interest in acquiring the company.That led to Tuesday’s announcement that Microsoft had struck a $68.7 billion deal to acquire Activision, adding a legendary game publisher responsible for franchises like Call of Duty and World of Warcraft. It’s a combination that catapults Microsoft to the top ranks of game makers, gives the company the mobile audience that has eluded it for years, and adds strength as the software giant and rivals race to build out the virtual-reality platform known as the metaverse.Though the events that paved the way for the eventual agreement kicked off in mid-November, Microsoft senior executives had been dropping hints for months that they were looking for deals. CEO Satya Nadella had been searching since at least the summer of 2020 for an acquisition that would deliver the software maker a stable of consumer users. In November 2021, at an interview at the Paley International Council Summit, Spencer reiterated his frequently stated position that he was on the hunt for acquisitions, noting Xbox in particular wanted deals that added casual and social games — something provided by Activision’s mobile titles. “We have a lot of ambition,” Spencer said at the summit.

Read more about Microsoft proposed acquisition of ActivisionAbout the same time in November, the pressure increased on Activision after a Wall Street Journal story detailed allegations of rape at one of the game publisher’s studios and said Kotick had been informed of the alleged incidents, which occurred in 2016 and 2017, as well as an out-of-court settlement, and failed to report them to the board. The paper cited interviews, company emails, regulatory requests and other internal documents that informed its reporting that the CEO knew about employee misconduct in many parts of the company. It also noted settlements that included cases in which Kotick was accused of mistreatment.

Following the explosive report, Spencer circulated an email inside Microsoft saying he was “evaluating all aspects of our relationship with Activision Blizzard and making ongoing proactive adjustments” in light of the revelations. The two companies have partnered for nearly two decades as Activision sold games for Microsoft's Xbox console — the first Call of Duty was released for the original Xbox. In an email to staff seen by Bloomberg News, Spencer said he and Microsoft’s gaming leadership team were “disturbed and deeply troubled by the horrific events and actions” at Activision.

Behind the scenes, Spencer was working on a merger approach. Microsoft's pitch, as with its other large gaming deals, heavily leveraged Spencer’s decades-long industry experience. The executive joined Microsoft as an intern in 1988 after a stint hawking video games and PC gear in a Computer Mart in Vancouver, Washington.Yet even as Activision fought to salvage its reputation with players and investors—the stock dropped about 15% in the month after the Wall Street Journal article — and weighed the potential takeover, Kotick and the board weren’t sold on Microsoft as the acquirer, two people familiar with the matter said. Activision made calls to try to find other interested parties, said the people, who asked not to be identified talking about private conversations. Those included Facebook parent Meta Platforms Inc. and at least one other big company. But no other serious interest materialized.  A Meta spokesperson declined to comment.

Picking up on Activision’s hesitations, Microsoft backed off, telling the game publisher it was happy to remain partners and work on selling more Activision titles on Xbox. Ultimately Activision came back to the table and both companies’ teams worked through the holidays to get the deal done. Microsoft brought in Dan Dees of Goldman Sachs Group Inc. and Activision hired Nancy Peretsman at Allen & Co. While Nadella was involved when needed, the bulk of the merger talks took place between Spencer and Kotick, said the person.

Nadella’s first acquisition as CEO, the $2.5 billion purchase of Minecraft in 2014, also came about thanks to Spencer’s relationship with that game’s creator, Markus Persson, known to gamers as Notch. Persson went directly to Spencer when he wanted to sell Minecraft, which was previously privately owned and is considered one of the best-selling games of all time. Spencer also personally negotiated Microsoft’s $7.5 billion acquisition of ZeniMax Media Inc., owner of the storied video-game publisher Bethesda Softworks, in 2020 with that company’s co-founder Robert A. Altman.

While Microsoft discussed the Activision deal, another large video-game company made its own mobile play. Last week, Take-Two Interactive Software Inc. announced an agreement to buy mobile game maker Zynga Inc. for $11 billion. Bankers working on that deal reached out to Microsoft to see if they were interested in a bid for Zynga before Take-Two sealed the deal, according to the person. Microsoft demurred.

As it turned out, Microsoft had its sights on something bigger.