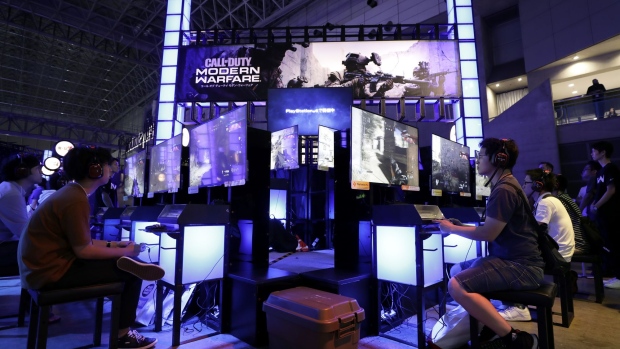 Attendees use Sony Corp. PlayStation 4 (PS4) game consoles to play the Call of Duty: Modern Warfare video game at the Tokyo Game Show 2019 in Chiba, Japan, on Thursday, Sept. 12, 2019. Over 650 companies and groups are exhibiting at the annual game show, which runs through Sept. 15. , Bloomberg

(Bloomberg) -- Activision Blizzard Inc. will delay a Call of Duty game that had been planned for next year, the first time the franchise will be without an annual mainline release in nearly two decades, according to people familiar with the plan.

The company is pushing off the release after a recent entry in the series failed to meet expectations, leading some executives to believe that they’re introducing new versions too rapidly, said the people, who asked not to be identified because they weren’t authorized to discuss the deliberations. The decision was not related to Activision’s agreement to sell itself to Microsoft Corp. for $69 billion, the people said.

Activision is working on other projects to fill the gap next year. A Call of Duty game set to come out this fall will receive a steady stream of additional content, and there will be a new, free-to-play online title next year, said the people. Treyarch, the Activision-owned studio working on the now-delayed game, will also help with the free-to-play title, the people said.

A spokesman for Activision didn’t immediately respond to a request for comment. The shares declined as much as 1.4% in extended trading Tuesday on the news.

The delay will have a massive effect on the video game industry. Every fall since 2005, Activision has put out a new, premium entry in the lucrative shooting series. Call of Duty games regularly top yearly sales charts and have sold more than 400 million units since the series began in 2003.

Last year’s entry, Call of Duty: Vanguard, failed to meet Activision’s sales expectations, leading executives to suspect that it had been cannibalized by the previous year’s game. A free-to-play version released in 2020, Call of Duty: Warzone, remains a massive success and may have drawn players away from the premium entries.

Activision remains autonomous, and Microsoft could decide to change these plans after the acquisition, which is expected to be finalized by the summer of 2023 pending approval from regulators.

Call of Duty games are developed by a rotating stable of Activision’s development studios. This year’s entry, a new Modern Warfare game, will be made by Woodland Hills, California-based Infinity Ward. Bloomberg earlier reported that Activision executives were seriously considering skipping a year of Call of Duty.

(Updates with shares in the fourth paragraph.)