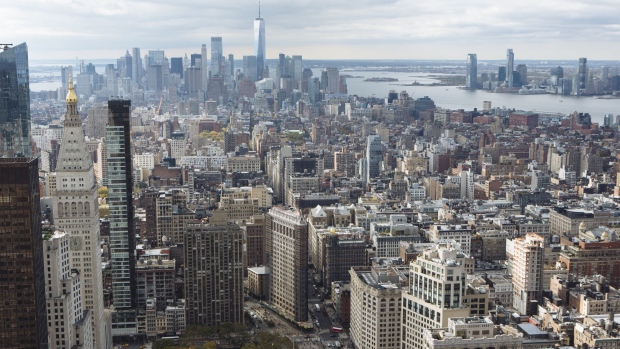 The lower Manhattan skyline is seen from the Madison House condominium at 15 East 30th Street in New York, U.S., on Monday, Oct. 28, 2019. Madison House, a 800-foot condo building is the tallest in Manhattan's NoMad neighborhood. But its developers aren't reaching for the sky on pricing. Photographer: Angus Mordant/Bloomberg , Bloomberg

(Bloomberg) -- Shareholder activism is expected to bounce back in the second half of 2020 after many investors shied away from big boardroom battles in the first six months of the year as the coronavirus roiled markets.

Just 32 new campaigns were launched at U.S. companies with a market value of more than $1 billion in the first half of the year, down more than 50% from a year ago, according to data compiled by Bloomberg. Smaller targets got less breathing room: campaigns against sub-$1 billion companies rose 7% globally, the data show.

Overall, activists launched 290 campaigns in the first half of the year, down about 5% from the same period in 2019.

Some activists chose to steer clear of campaigns while their potential targets were focused on staying afloat and protecting employees, said Pamela Codo-Lotti, head of cross-markets shareholder advisory and activism defense at Goldman Sachs Group Inc.

Codo-Lotti expects activity to increase as activist investors gear up for board nomination deadlines toward year end. Goldman Sachs, which was the lead financial adviser for activist defense in the first half, predicts the upswing in activity will be driven by a rebound in mergers and acquisitions, which investors will be agitating for.

“There is a real ‘game on again’ mentality to what we are seeing now,” Codo-Lotti said in an interview. “It’s really just a question of when to go public or when to be more aggressive.”

Companies that have weathered the crisis worse than their competitors will be targets, Codo-Lotti said, after several activists used the volatility to build small positions.

The rise in campaigns in sub-$1 billion targets is partly due to first-time activists and smaller hedge funds that couldn’t afford to wait as their portfolio companies foundered, Elizabeth Gonzalez-Sussman, a partner at Olshan Frome Wolosky LLP said. Olshan was the lead legal adviser to activists in the first half of 2020, the data compiled by Bloomberg show.

Still, some activists did go ahead with campaigns where they’d already committed capital and were planning to push for changes, she said. The pandemic turned more of a spotlight on some companies that were already in activists’ crosshairs.

“If there was a long-term underperformance prior to Covid-19, it almost enhanced the need to continue the engagement because they weren’t the right board to navigate the crisis,” she said.

Gonzalez-Sussman said the Black Lives Matter protests will likely put a renewed focus on diversity in boardroom battles as well.

Several big campaigns settled in the early part of the year as soon as the impact of Covid-19 became clear. Elliott Management Corp. reached a deal that saw three new directors join the board at Twitter Inc., while billionaire Carl Icahn settled for four board seats at Occidental Petroleum Corp. after a lengthy battle at the oil producer. In the first half of 2020, about 47% of the proxy contests settled, up from 35% a year ago, the data show.

Not all activists pumped the brakes though. Starboard Value LP pursued boardroom battles on several fronts. Starboard settled at most of the companies, including CommVault Systems Inc. and Merit Medical Systems Inc. But it went the distance at chemical maker GCP Applied Technologies Inc., taking control of the board through a virtual meeting.

The expectation is for a renewed push at larger companies in the rest of 2020 and early 2021, simply because larger funds are raising capital they have to deploy, said Kai Liekefett, partner and chairman of the shareholder activism practice at law firm Sidley Austin LLP. Sidley provided legal defense advice on the most campaigns so far in 2020, the data show.

Liekefett expects that hostile takeovers will pick up potentially with the aid of activists, pointing to a recent approach for CoreLogic Inc. from Bill Foley’s Cannae Holdings Inc. and Senator Investment Group LP, which married an operator and activist in an unsolicited takeover.

The question remains whether activists will wait until 2021 or push for changes sooner.

“We’re going to see a high, if not a record number, of special meetings, proxy fights and consents solicitations in the back half of the year,” Leikefett said, “unless a second wave hits corporate America so hard activists don’t feel comfortable going forward.”