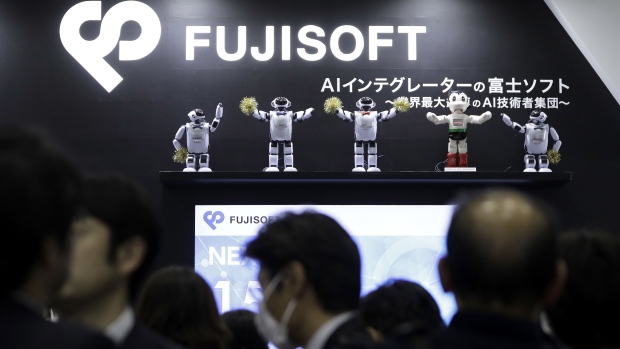 Fujisoft Inc. Palro robots perform at the company's booth at the Artificial Intelligence Exhibition & Conference in Tokyo, Japan, on Wednesday, April 4, 2018. The AI Expo will run through April 6. , Bloomberg

(Bloomberg) -- 3D Investment Partners Pte, the money manager that pushed for change at Toshiba Corp., is targeting another Japanese company with a proxy fight over board directors that will be decided in a shareholder vote on Sunday.

Singapore-based 3D is seeking to appoint four outside board members at Fuji Soft Inc., a Tokyo-listed software firm with a market capitalization of about $2 billion. 3D, the largest shareholder with a 21% stake, argues that Fuji Soft’s board has “presided over a long period of inefficient capital allocation and weak performance.” At particular issue is the company’s large real estate holdings.

It’s the latest test case for whether shareholders are becoming more influential in the country’s more than $5 trillion equity market. For much of the past decade, Japan has worked to overhaul how companies are run and get stock owners to press management to improve profitability and shareholder returns.

In a sign of how Japanese management teams are listening more to shareholders, Fuji Soft has endorsed two of the fund’s director nominations, although it also proposed three additional candidates of its own. The company also set up a Corporate Value Enhancement Committee in August and says its goal is to adopt advice and suggestions from stakeholders on how to improve the company’s value.

“We found a gap between the way we think and how the capital market participants view things,” Fuji Soft President Satoyasu Sakashita said in an interview. The company plans to address shareholders’ requests as needed, he said.

3D, which declined to be interviewed for this story, rejects two of Fuji Soft’s board candidates and says that because the committee is composed of current Fuji Soft directors, it will have the same issues as the existing board and will be ineffective.

Two major proxy advisers, Institutional Shareholder Services Inc. and Glass Lewis & Co., differ in their voting recommendations for the extraordinary general meeting. ISS suggests backing three of 3D’s candidates and two of the company’s, saying 3D has presented a “compelling case that change at the board level is warranted.” Glass Lewis encourages shareholders to vote for all of Fuji Soft’s nominations, arguing the company is “earnestly considering various reforms.” It says they should reject two of 3D’s candidates.

This is 3D’s second proxy fight at Fuji Soft. The fund failed in March to have two director candidates -- including its founder and chief Kanya Hasegawa -- appointed to the company’s board. But at that time, it only held slightly more than 9% of Fuji Soft’s shares. Now, it owns more than double that percentage.

Hasegawa founded 3D in 2015 after previously working at companies including Tudor Investment Corp. and Goldman Sachs Group Inc. The value-focused investment fund is one of Toshiba’s largest shareholders and has pressed the conglomerate on its strategy after years of mishaps. 3D also recently sent a letter to beverage maker Sapporo Holdings Ltd., asking its outside directors to address “prolonged underperformance.”

--With assistance from Hiroshi Miyazaki and Kurt Schussler.